I went to the Country Music Hall of Fame when I was in Nashville, because I was a tourist and it seemed like a tourist-y thing to do. There were some weird things there, like this taxidermy band made of squirrels that Hank Williams shot himself, which I definitely didn’t want: 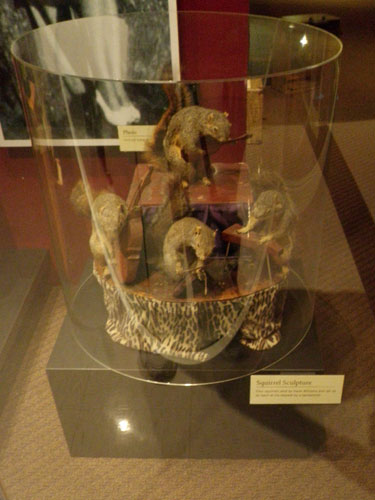 And this oboe clarinet lamp, which I totally did want: 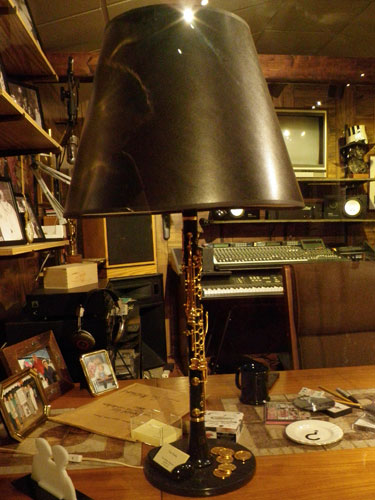 I wonder if you can blow through the light bulb socket and make it play?

Of all the items at the museum, the one that stuck with me was a pair of Hank Williams “cinnamon-orange silk pajamas.” I didn’t take a photo of them because…I didn’t. Sorry, live with it. First off, it seems odd to me to describe pajamas as cinnamon colored because it makes them sound edible. I’m 99% sure they were not edible. But secondly, it made me wonder, at what point do your pajamas become museum worthy? My pajamas—not currently museum worthy. However, if I were to put my pajamas in a vacuum-sealed container for the next 1000 years, I bet they would be considered museum worthy by our descendants. They might not even wear pajamas in the future! They might all be living naked on the moon! The pajamas of a 21st century, middle-class woman would be considered a relic, just as the pajamas of a 11th century, serf would be museum worthy today.

But Hank Williams is not 1000 years old. His pajamas are in a museum because…I really don’t know why. Do country music fans really care about his pajamas? I guess if you’re a big Hank Williams fan you might be interested. If you consider Hank an icon, seeing his pajamas humanizes him and makes him seem like a real person who wears bed clothes like the rest of us. They’re the pajamas behind the persona. So, within that particular subculture, Hank’s pajamas are museum worthy. However, they’d never make it to the British museum or the Louvre. I mean, the Louvre doesn’t even display textiles, do they? Maybe they do. It’s a huuuuuuuge place and I don’t care enough to look it up.

So, that’s what I got from visiting the Country Music Hall of Fame—a pajama puzzle. I’m weird, I know. As for the rest of the museum, it really wasn’t that big so I didn’t feel like I got my money’s worth. But I’m not big into country music either. The sound design of the museum was rather cool though. They had directional speakers hanging from the ceiling so you’d hear different songs at different spots in the building. I wouldn’t qualify the place as a must-see though, unless you’re really into pajamas.

Later: Emergency alert: Someone please explain this to me

Earlier: My Bye, Bye Bash at the Biergarten