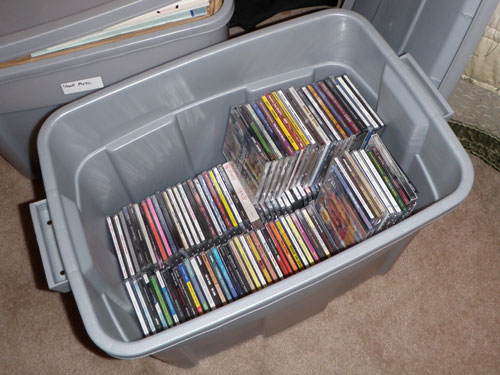 In preparation for my relocation, I am relocating a lot of my stuff—either to the trash compactor or to the half-price bookstore. While I feel some natural attachment to the items I own, it is amazing what you’re willing to let go of when you ask yourself, “Do I want to haul this 600 miles over the mountains?” So, farewell to my VHS fansubs of the fifth season of Sailor Moon! Adios to my college linguistics textbook! And good-bye to the majority of my CD collection!

When I was a kid, I would sometimes go through my dad’s record collection which took up two shelves of the living room bookcase. The vinyl discs were somewhat fascinating, and it was interesting to think of a time when this was the only way to purchase recordings of music. Looking at my hundreds of CD cases, I realized they are the 1990’s equivalent of my dad’s record collection. I haven’t used any of the discs since I ripped them to MP3 several years ago. When you put about 200 of them in a box, they get rather heavy. So I’ve decided to let go of most of them, excluding any CDs with interesting packaging or by artists I particularly like.

As you can see in the photo above, I had them stored in a plastic storage tub. I bought several of these tubs after I returned home from a bridal shower one weekend to discover the toilet in the empty apartment above me had overflowed, thus ruining my entire Sandman comic collection. I’ve been paranoid about unexpected flooding ever since, and prefer to store things in waterproof containers in case the worse happens. It’s rather nice to be rid of the items. I don’t have to worry about losing them to water damage. Instead, I’m letting them go on my own terms.

Earlier: A winner and mutant strawberries