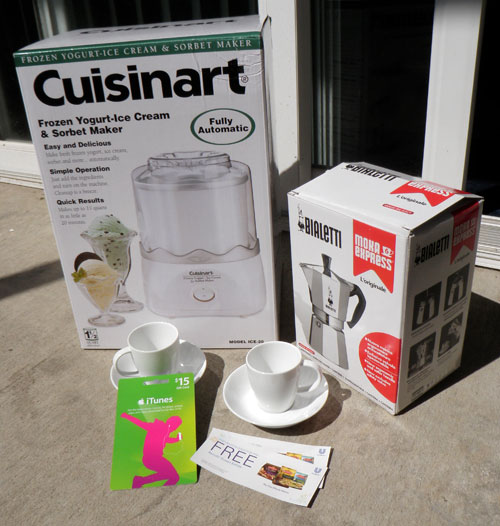 Disclosure: I received a prize package from Bertolli for this giveaway.

I was a bit skeptical when Bertolli contacted me about their new webisode series, Into the Heart of Italy. I figured the videos would be stilted advertorials of no interest to me or my readers. Then I actually watched an episode and was surprised by how much I liked it. It’s, like, an actual show. (Warning: It also made me hungry. You probably shouldn’t watch on an empty stomach.)

Into the Heart of Italy is a series of 8-10 minute episodes that feature Rocco DiSpirito, Marisa Tomei, and Dan Cortese running around Italy making and eating delicious food—when they’re not being kidnapped by a Chicken Man. I always say, “If you go to Italy, beware of the Chicken Man!” I’ve always liked Marisa Tomei; I liked Rocco DiSpirito’s reality show The Restaurant that was on several years ago; And who doesn’t love Dan Cortese, former VJ and host of MTV Sports? You remember MTV Sports, right? What’s that? You’ve never heard of it? You were born in the 90’s? You think I’m old?! Let’s not speak of this again.

The most recent episode, “The Secret of the Mediterranean,” is embedded below and features the trio running around a Carnevale, catching shrimp and making a Garlic Shrimp, Penne and Cherry Tomato dinner. The show is reminiscent of The Amazing Race in that they receive clues that lead them to the next location.

So, as part of their promotion of the series, Bertolli has given me a prize package to give away on the blog. Valued at $115 and pictured above, it contains:

As the PR people put it, “you can enjoy your Bertolli Frozen Meals for dinner then finish the celebration in true Italian style with homemade gelato, Italian espresso and the sounds of contemporary Italian music.” They also sent me two recipes form Paula Jones (no not that Paula Jones) from Bell ‘Alimento:

To enter this giveaway, leave a comment including your favorite Italian food. All entries for the giveaway must be located in the US. (Sorry, non-Americans!) The contest will be open until 11:59pm on Monday, May 10th, 2010. A winner will be chosen randomly.

Even if you don’t win this giveaway, you can enter the Bertolli Sweepstakes by watching every episode of the series and correctly answering a question about it. The winner of that contest will win a trip to Italy (though I assume will take longer than 10 minutes to get you there, unless you already live in Italy, in which case you can’t enter.)

Later: Moving to the tar heel state! (Uh, what is a tar heel?)

Earlier: The weight of freedom a.k.a. what am I going to do with my life?