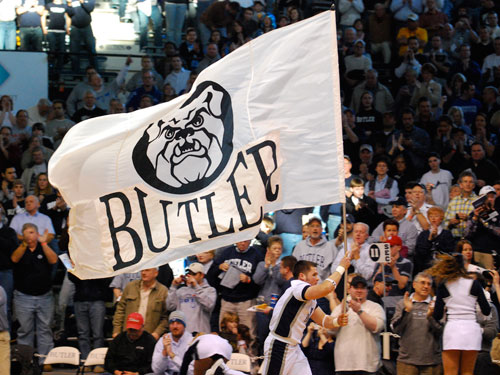 Monday night I didn’t sleep that well, and Tuesday I felt nauseated and anxious for part of the day. Why? Because of a basketball game.

I am not a sports fan. I went to the University of Kentucky for a few years, which has (had?) a well-regarded basketball program. I worked one-on-one with a student during one of the psychology labs, yet I had no idea he played basketball until the teacher asked about his jump shot halfway through the year. During our project, I had been more concerned with his note-taking skills than with his ability to toss wadded up paper into the trash basket. I can’t even remember the guy’s name.

So, me = not a sports fan. Yet, at this moment I can name at least six of the Butler Bulldogs’ basketball players. (Hayward, Howard, Mack, Jukes, Nored, and Veasley.) For those of you who, like my normal self, don’t care about sports, let me explain. Every year there is a national tournament in America between the top 64 college basketball teams. Butler is a small school in Indianapolis with enrollment of about 4000, so it was a big deal when they simply made it to the Elite Eight, the phase of the bracket where only eight teams are left. I was happy for the local team, but not that involved. Butler has a beautiful campus, and it was nice that a local team had done good, but I don’t care about sports. Then Butler won their game and got to go to the Final Four, which was held here in Indy. Now I was excited.

It was fun to root for the little school that no one thought would make it so far. They would get to play right here in town where everyone suddenly loved them. I liked these bracket busters! I watched their Final Four game with a book on my lap, burying my nose in the pages during the tense moments when Butler was down. I’m not used to caring about sports teams, but I really wanted Butler to win. They’d won me over with their team spirit and their adorable bulldog mascot.

Warning: It is much harder to watch sports when you are invested in the outcome of the game. I missed the apathy and disregard I normally have for basketball, because apathy never made my feel nauseated. Apathy just makes you feel numb. The game was tight and by the end I was red in the face from worry, but they won! It was amazing! Butler got to go to the final game and compete for the national championship!

Except, they were playing Duke. DUN-DUN! Duke has a reputation of being a very good team, so good that everyone hates them for being good and hogging all the awards. I wasn’t certain how the Bulldogs would do, but I crossed my fingers that it wouldn’t be a blow out. I didn’t want my boys to be embarrassed on national television, because they were “my boys” now. I was not the only one loving these kids. By now, Matt Howard’s mustache had not one, but two fan pages on Facebook. Then the tip off came, and the game was a fierce contest. Butler would pull ahead, and then Duke came back, only to be forced behind again by Butler, who’d succumb to Duke.

It was very stressful.

Finally, at the end of the game, Butler was down but had a chance to win the game with one shot. The basketball soared…and bounced off the rim. But then! There was another chance to win and Hayward threw the ball at the basket from halfway down the court and…it bounced off. Because life is not a movie. Butler lost. And there was much sadness around the world.

I used to hear people talk about the sadness and depression that came from watching their favorite teams lose, but I thought they were exaggerating for comic effect. Now I know that they weren’t. These kids made me feel invested in the game, so I felt invested in the loss too. I tried to cheer myself up by telling myself that a basketball championship is not that big of a deal in the big scheme of life, the universe and everything. I couldn’t even remember who’d won last year. But I realized, this championship meant a lot to the Bulldogs, and because of that it meant a lot to me.

I am a risk-adverse person. I tend to take the safer path. When I watched those kids come out on the basketball court Monday night, I realized that they were setting themselves up for either major joy or major sorrow. Yet, they ran out there anyway and decided to take the risk of heartbreak for the chance at the joy of victory. I really admire that, because I don’t know if I’d have the stomach to do the same. I really hate feeling this nauseated.

But I also thought, the Butler Bulldogs team that would have made one more shot is not any noticeably different than the Butler Bulldogs team that fell short by one shot. They are the same guys they would have been had they won, the difference between them is just one bounce of the ball off the rim. So, I hope they are proud of what they did, and I hope that the nauseated feeling I have, (that is probably quintupled in them) goes away quickly. I hope they don’t feel awful when people talk to them about the game, and instead remember everything good about the experience instead. There won’t be any parades, there probably won’t be a movie made out of this story, and perhaps not quite as many girls will want to sleep with the star player as would have had they won. But this team made me care about basketball. That’s a miracle in itself. Probably not the miracle they were looking for, but I hope that miracle will do.

Later: Odds and ends on the weekend