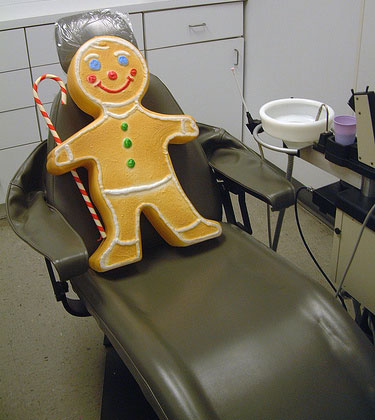 I was so distracted by my cold yesterday, that I forgot to mention I also have an intermittent toothache, all in addition to that constant headache I’ve had for almost two years. (Our anniversary is only 6 days away!) Anyway, I’m not dead yet, but the toothache rather annoys me on a philosophical level, which my other aches and pains have failed to do. The toothache only arrived after I had a decaying filling replaced three weeks ago, which I only did because I thought it would prevent a toothache. Irony, I hate you.

The tooth only hurts when cold water or hot coffee gets on it. Then it will ache for 20-60 minutes while I think, “Root canal, root canal, I really want a root canal.” Which just serves as proof that the pain drives me temporarily insane. The rest of the time it’s perfectly fine and I forget it’s even a problem. I’ve been back to the dentist twice now and he hammered on it and blew cold air and cold water on it and x-rayed it and can’t find anything wrong with the filling itself. He said the nerve could still be irritated from the drilling, and that sometimes you have to give fillings time to adjust. He gave me toothpaste for sensitive teeth and told me if the tooth starts aching without any stimulus or wakes me up at night, I should see an endodontist for a root canal.

I did some Googling and it seems like hundreds of other people have had the same problem before, particularly with composite fillings, which are the white fillings shaded to match your teeth, not the metal ones. I’m torn about what to do. I suspect if I wait it out for another month or two, the pain will probably subside because that’s what happened when I got a crown last year. However, when a splash of hot tea or cold soda gets on that molar, OMG, I want to rip out the tooth myself with a pair of needle-nose pliers. I have dental insurance, but it doesn’t cover the full price of a root canal, so…I dunno. I suppose I’ll wait it out for now and keep my fingers crossed.

This experience has made me want to say two things. First, please floss! I know, it’s a pain, but it’s more painful not to. Seriously. You do not know what pain and suffering I could have saved myself simply by flossing and brushing more in my youth. Fillings don’t last a lifetime, and I’ve got over a dozen of them that I’ll be maintaining for the next half century or so. Secondly, what are your dental horror stories? I think the pain I’m in might be lessened if I knew that other people have suffered more than I have. Misery loves company, and I’m throwing a party. Come on in!