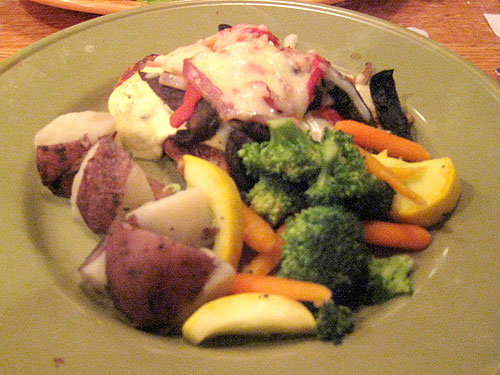 PastaQueen goes to Applebees, but doesn’t eat any apples.

Disclosure: Applebee’s sent me a free gift card to try their menu.

“Is that the Mortal Kombat theme?” I asked my brother as we waited for my mom to meet us for dinner at Applebee’s.

“No, it’s that song, Twilight Zone by 2 Unlimited.” My brother used to DJ and has an encyclopedic knowledge of dance tunes.

“Oh, wow. It’s like 90’s night here,” I said. We’d already heard One of Us by Joan Osbourne and Adia by Sarah McLachlan. I was starting to have flashbacks to high school, when I’d lay in bed listening to WDJX with a blank cassette in my tape player, ready whenever I felt the need to slap the record button to capture a song I liked. This was before Napster.

“Yeah, they’re probably playing this stuff because people your age are having kids and bringing them to Applebee’s,” my brother, the business and marketing major, said. I sat dumbstruck for a moment as I thought about all my high school friends on Facebook whose profile pictures included babies and toddlers these days.

My mother showed up soon, before I shriveled up and died of my old age. She arrived just after a table of ten across from us left. Their party included several toddlers who were all loud enough to ensure promising futures in the bingo calling industry. Their departure made our dining experience more pleasant than it would have been otherwise. We got down to ordering some food that was on the house because of the free gift card an Applebee’s representative sent me.

Applebee’s has an Under 550 Calories Menu and the restaurant also lists the Weight Watchers points for several of their entrees. This can be handy for anyone watching what they eat. I always feel like I’m playing roulette when ordering off of most restaurants’ menus, trying my best to guess what is low-calorie. Unless you have a web browser handy to search the Internet for nutritional info, it can be hard to figure out what is the best item to order. You can view the Applebee’s menu here.

We started off our meal with a Spinach & Artichoke Dip appetizer, which was tasty, as most cheese-based items are. My mom ordered the Spicy Shrimp Diavolo, my brother got the Pecan-Crusted Chicken Salad, and I ordered the Grilled Dijon Chicken & Portobellos. My mom liked her dish, but warned us that it was definitely spicy. My brother was less impressed with the salad and said the chicken tasted like it’d been microwaved. I was satisfied with my meal, though it wasn’t anything worth swooning over. The broccoli was a bit crunchy and it wasn’t all that much better than a TV entrée. My mom ordered the Chocolate Mousse for dessert, which came in a small cup that she said was just the right size. And really, it’s hard to go wrong with chocolate. Mmm, chocolate. 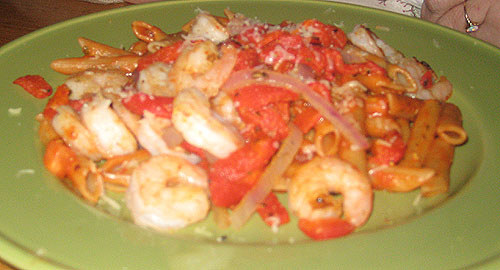 When the bill came, I was able to cover the cost of the appetizer, three entrees, a dessert and the tip with the $55.00 gift card I received, which was rather impressive. Applebee’s is definitely an affordable choice if you want to take the family out or don’t feel like cooking for yourself. When I looked around the restaurant, I saw a lot of families with kids, so it’s probably a good choice if you have kids and don’t want to get nasty looks if they start acting up.

So overall, the food was mediocre, and it wasn’t quite the atmosphere I would personally go for, but I think they have a niche that appeals to a lot of people. I liked that I left the restaurant knowing I hadn’t binged horribly. The best part though, was just hanging out with my family for the night, laughing and catching up. On that level, Applebee’s definitely hit the spot.

Earlier: What the beck?!