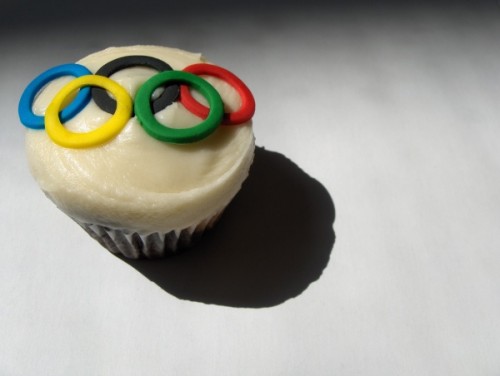 You know what I like about the Olympics (besides the thematically delicious cupcakes)? I just like knowing it’s there. During the two weeks in which the winter games are held in Vancouver, I know that I can turn on my TV, flip to NBC, and there is a 70% chance I can watch someone more athletic than me do something dangerous while wearing an outfit that would look ridiculous at a cocktail party. It’s comforting. It’s reassuring. It’s solid.

I like turning on the Olympics while I’m writing emails, or designing mockups, or coding HTML, or writing blog entries, like right now. It’s non-offensive, uplifting except when it’s devastating, and I can tune in and out without losing the plot. People spin, jump, zoom by. I got it. I like seeing Bob Costas in prime time and wondering what he gave the devil in exchange for never aging. I like listening to Dick Button talk about an ice skater’s artistry and hearing Scott Hamilton get SO EXCITED when someone lands a quadruple jump.

It can get boring and repetitive, especially after you’ve watched 20 people execute the same ski jump. It can be odd and perplexing, like when you watch men run around the snow on skis to shoot targets in a blizzard. (Who made this stuff up?) But it’s there when I need it. It’s like knowing I can always go home. I might not need to go there right now, but that haven is waiting if I need it.

It reminds me of when a radio station in town, WLRS, “The Walrus,” got bought or traded and had to change its programming rather rapidly and unexpectedly. During the week they were making the change, they played “I Am the Walrus” by the Beatles. All week. Every day. 24 hours a day. When I first tuned in I only caught half the song before pulling into my driveway. The next day I heard it again and thought, “What a coincidence! They played that song yesterday.” And then the song repeated and I wondered if the DJ was asleep or in the bathroom or asleep in the bathroom. Then I figured out what was going on and I found myself tuning into WLRS several times during the week to listen to the song over and over. When the DJs came back and the music changed, I kind of missed the song. I missed knowing it was there.

I suppose it’s like seeing a McDonalds in France. Yeah, it’s a rather disturbing sign of the homogeneity of globalization, but there is something comforting about knowing you can get a hamburger and fries in France that tastes like a hamburger and fries back home. I like it when the Olympics is on and I’ll miss it when it’s gone, but until then I’ll be tuning in and ignoring it while I go about doing other things.

Later: What the beck?!