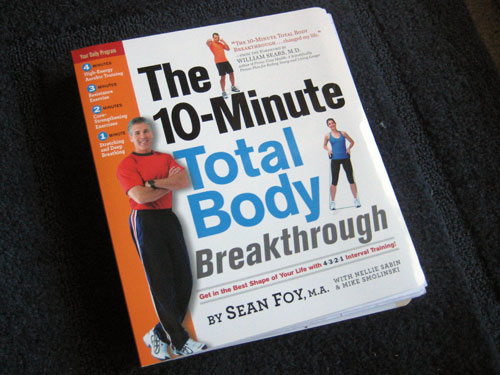 PastaQueen reads a book. And finishes it! And tells you about it!

I requested and received a complimentary copy of this book to review.

I don’t do as many book reviews as I’d like to because, well, they require you to read the book. I wish I left a trail of half-eaten meals in my wake instead of the trail of half-read books that’s there instead. However, I actually did read this book because I became interested in it after my trip to the Nutrilite Center for Optimal Health several weeks ago. During one of the sessions, Diane Paetz, a fitness consultant for Nutrilite, led us through a 10-minute workout from Sean Foy’s book, The 10-Minute Total Body Breakthrough. Diane mentioned the book during her presentation, but she didn’t beat us over the head with it, proving that the soft sell is much more effective than the hard sell. However, the thing that made me decide to request and review a copy of this book was: 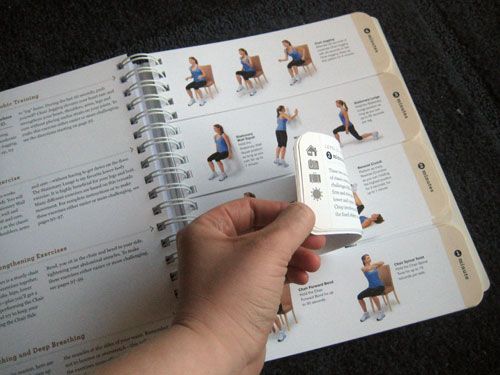 The flip cards! The back of the book has four groups of cards that you can flip forward and backward to create customized workout routines. This reminded me of a beloved children’s book I used to have. It allowed you to flip three rows of cards that had animal heads, torsos, and legs printed on them to create hilarious combinations.

However, that was not the only reason I wanted to read the book. My enthusiasm for exercise has taken a nosedive ever since I got a chronic headache two years ago. And since I moved to a new apartment six months ago, I don’t have anywhere fun to run like I did when I lived near the nature trail. Running on the treadmill day after day is boooooring. So, lack of motivation and lack of opportunity have led me to be in the worst physical shape I’ve been in for awhile. I’ve also been fighting bouts of depression intermittently, so the idea of exercising for 30 minutes a day can often seem like an insurmountable task, even though I know it would have a beneficial effect on my mood.

So, the idea of a 10-minute workout was very appealing to me. It’s easy to talk myself out of running for half an hour, but I’d have to be a real slack-ass to say I can’t pull myself together for a 10-minute workout. There are more than 10 minutes of commercials in an hour long drama. Surely I can spare 10 minutes. As the books says, “What is the one thing people can do to destroy their health? The answer: Nothing.” Ten minutes beats nothing.

As with all diet/fitness/change-your-life books, it starts out by telling you how this book will change your life, including success stories from people who’ve done the plan. (Diane from Nutrilite is one of them.) Next there’s an overview of the plan which includes three levels of difficulty that you can work up through as you become more fit. The ten minutes of the workout are broken into four minutes of HEAT (High-energy aerobic training), three minutes of resistance exercise, two minutes of core strengthening exercises, and one minute of stretching and deep breathing. This is also referred to as 4321 Fitness.

There are also chapters on the science behind the 4321 strategy and recommendations for what foods to eat and why. Foy recommends the red light, yellow light, green light plan for eating, which divides foods into those three groups depending on how much caution to observe with each. Green light foods can be eaten in abundance, yellow lights should make you stop and think, and red lights should be eaten with extreme caution. Foy doesn’t believe in banning foods because that just makes them all the more appealing.

Psychological factors are also addressed. There is a chapter listing many good motivations for becoming fit. There is also a list of common excuses to avoid working out paired with a list of rebuttals to these excuses. Foy also reviews the six stages of change and the importance of things like setting goals, tracking your progress and getting support.

Overall, I really liked the attitude of the book. Foy shares many of the same health philosophies as I do, like the idea that you don’t have to be thin to be fit and that the diet mentality can sabotage even the best-laid plans. He stresses moderation over denial, and encourages people to eat real food instead of processed foods with artificial ingredients.

The workout aims to give you the most benefit in the shortest amount of time. The first four minutes take advantage of EPOC (Excess Post-Exercise Oxygen Consumption). It’s been proven that interspersing periods of intense exercise with moderate exercise causes your body to need oxygen at a higher rate that is did before you started, causing an “afterburn.” The strength-training and core-strengthening components add muscle tissue which burns more calories and helps your body composition. 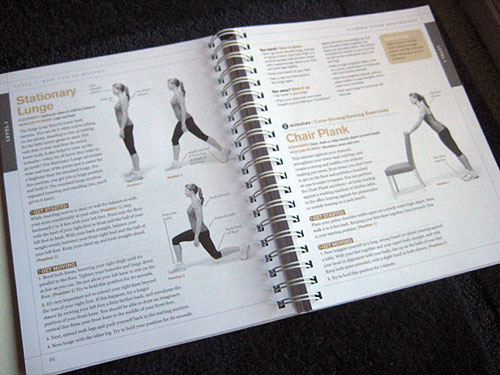 The bulk of the book is filled with pictures and instructions for the various exercises you can mix and match to make your workout. The book is spiral bound, making it easy to set it down on a table to refer to while you exercise. And as I said before, it’s got flip cards!

The book seems to be targeted at people who are just starting out and at people like me who want to ease back into a routine. If you’re already rather fit, you might not be as interested in this plan, but you can use it by choosing to do the more difficult routines and combining several 10-minute workouts into longer routines. I also don’t expect to get extremely buff doing only ten minutes a day. However, Foy’s plan aims to make you fitter, not necessarily a bodybuilder or extremely thin.

Really, the only problem I had with this book was it’s use of “10-minute” in the title, which really should be spelled out like “ten-minute” instead. I’m not usually a member of the grammar police, but this was an issue I had to look up recently for something else, so my brain can’t let it go unnoticed. I supposed they use the number instead of the word for marketing reasons.

I’m going to start following Foy’s plan and I’ll let you know how it goes!

Earlier: Calling in sick to my blog