You really don’t want to know what this machine was doing: 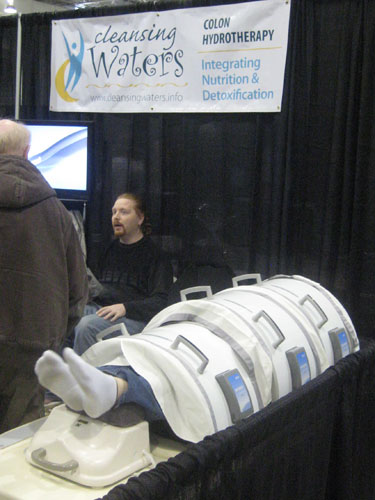 Honestly, even I don’t know what this machine was doing, and I was too afraid to ask for fear they’d try to pressure me into trying it too. All I know is that the machine wiggled that man back and forth, making him do a human snake impression. This happened last weekend at the inaugural Indy Health Expo at the state fair grounds. 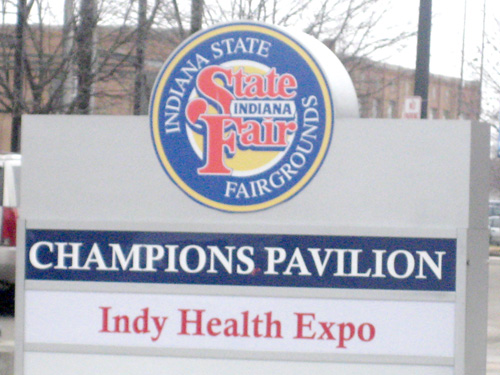 When I saw the fair advertised on Twitter, I thought the $10 entry fee and $3 parking fee would be well worth the potential blog material. And it’s a tax write-off too! The expo consisted of almost 100 booths where exhibitors displayed their wares and/or services. There were also four “stages” set up at the corners where some exhibitors were scheduled to do presentations during the day.

There was a real range of people there, including chiropractors, yoga practitioners, massage therapists giving back rubs in their booths, martial artists, plastic surgeons who had assistants so impeccably groomed they frightened me, dentists bleaching people’s teeth on site, natural health practitioners, cancer prevention programs, Wii Fit demonstrators, Vitamix people who annihilated a pound of fruits and vegetables with their powerful blender, life coaches, and Mary Kay and Avon ladies giving away catalogs. There were also people selling balloon rides, home baths, insurance, and bedazzled hats and shirts. I don’t know how that fit into the health theme, but I guess it fit into the unofficial “make money off of the visitors” theme. 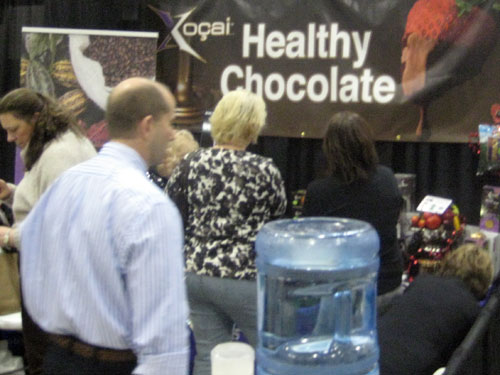 The first exhibit I saw upon entering was the “Healthy Chocolate” booth, either because of its positioning near the door or because of my innate ability to hone in on any free chocolate samples in my vicinity. The chocolate is “healthy” because it contains acai berries. Interestingly, several of the other exhibitors had bowls of candy set out in their booths and didn’t even bother to pitch it as health food. I suppose they wanted to lure people in with fun-sized Snickers bars before convincing them to get their colons cleansed. 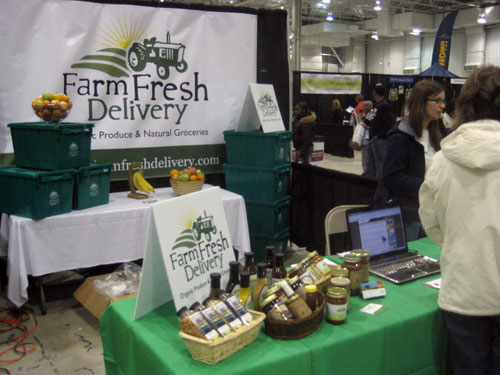 My Farm Fresh Delivery peeps were there too. They gave me a free pear and didn’t mention my colon. I also saw a Nutrilite stand, which reminded me of my recent trip to their Optimal Health Center. I passed by a booth where a woman was selling magnetic jewelry, which was pretty but would probably murder my laptop. At the end of one of the rows there was a hyperbaric chamber, which I was curious about, but fearful to inquire about. I didn’t have a buddy with me to accompany me to the emergency room after any hyperbaric accidents. 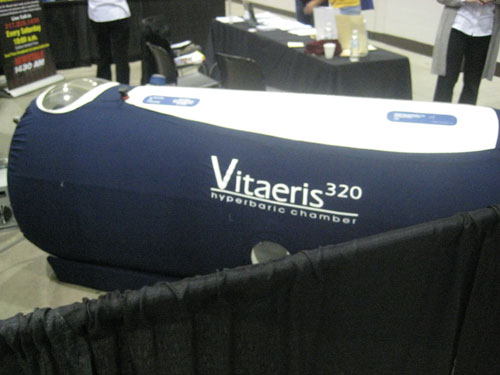 Near the end of my loop around the booths, I made eye contact with one of the exhibitors for a second too long and she pulled me into a pitch about Sahaja Yoga Meditation. She told me that I could make energy blossom out of my head like a flower and balance my energy so it shot out my fingers which would allow me to control aspects of my life…or something like that. I just kept nodding politely and then made my getaway as soon as I saw an opening. When I typed the word “Sahaja” into Google, one of the suggested searches was “Sahaja yoga cult,” which makes me glad I got out of there while I could.

I was particularly fascinated by the human dynamics of the exhibition. There were some booths that had mobs of people around them, usually because the exhibitor was giving away something free that had perceived value. This could be a prize awarded through a random drawing at the end of the day (provided you submitted your mailing address) or a coupon for a free service at their location. The other popular booths were giving away free trinkets and schwag, although there was one booth for insurance that had lots of free schwag and no mob around it. There were also some booths that were totally unmanned, and simply had pamphlets and brochures for the company that rented the booth. There were some booths there were manned, but the person working the booth was obviously not into it and was reading a book or just chilling out instead of pitching. Then there were the booths where the worker looked very anxious that no one was approaching them and would try to grab someone to talk to. I was also somewhat disgusted by my own behavior, in which I would scout the booths as I walked up and down the aisles, trying to assess if they had any free stuff worth my time. It was very predatory of me, but I somehow can’t help falling into this behavior whenever I attend exhibitions like this. 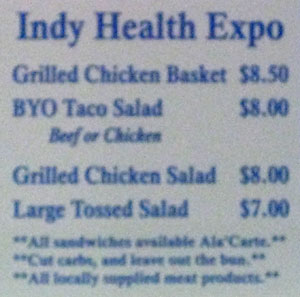 On the bright side, the concession stand offered a few healthy food options on top of their regular pizza and nachos. I entered a lot of the free drawings and won nothing, though I am now probably subscribed to a lot of kooky mailing lists. I did get to “spin the wheel” at two booths after entering their drawings and won a free facial at a spa clear across town and a $5 gift card to Ritters, an ice cream store, which I will probably never use.

When I emptied my baggy at the end of the day, I saw that I had gotten free toothpaste, floss, a chip clip, a bottle of acid-reducer tablets, a combo brush/mirror/sewing kit, a notepad, a lens cloth, a band-aid dispenser, a pear, a Paradise Café coupon, and a Kotex sampler packet. I also got leads on a few services I might actually be interested in checking out. However, the price of admission was worth the pure entertainment value of the fair alone, even if I didn’t ride the water snake.

Earlier: I may hate cooking, but my recipe was published anyway