So…you know that race I was going to run while wearing a Halloween costume? Yeah, that one. Well, something rained on my parade. More specifically, it was this big, yellow-green blob:

I enjoy a good footrace as much as anyone, and I did trek downtown to gawk at the freaks document the event for you guys, but my costume did not involve an umbrella or a rain slicker, so I decided it was best to sit this one out. Good thing too, because there were two people in pink pig outfits with “H1N1” written on their bodies who looked rather contagious. Between that and the wet leaves littered on the course path, I probably would have broken my neck and then developed pneumonia.

My bystander status meant that for the first time in my life I got to watch the start of a race instead of standing patiently at the back waiting for everyone else to move. Did you know they have people on bicycles leading the runners? I had no idea! I always thought that the lead runners had studied the course in advance as part of their rigorous training regimen to know which way to go. It looked rather fun to be leading a costumed pack of people through the dark. The locals taking an evening stroll down the canal sure did look surprised to see Spider-man and The Flash run by. Spider-man was outpacing The Flash too, which didn’t seem right. (What do the comic book freaks have to say about this scenario? Could that really happen if The Flash were handicapped in some way?)

I enjoyed seeing everyone’s costumes. I particularly like that moment when my mind makes the connection between how they’re dressed and who they’re supposed to be, like I’m figuring out a puzzle. There were about 200 people, but two-thirds of them were dressed like runners. I bet they were embarrassed that so many people were wearing the same costume as them! There probably would have been even more people if the weather had been nice. Here are some highlights if you need some costume ideas for next year: 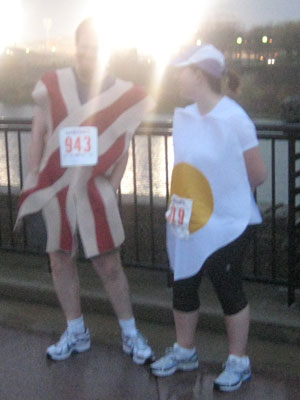 Bacon and eggs! Cute costume, but I would be afraid of being eaten. 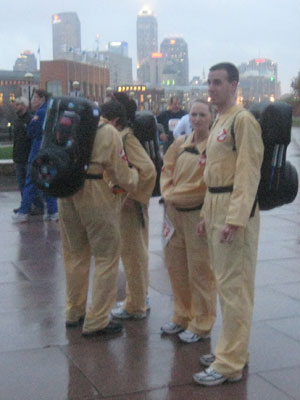 The Ghostbusters looked rather waterproof. 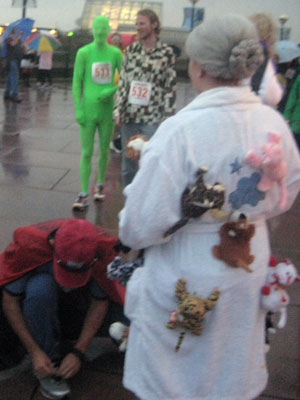 The crazy cat lady was my favorite outfit. In the background there is a guy in a green suit who was near the lead of the pack. What is he? A green screen? 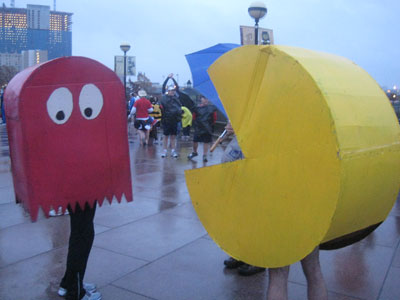 Pac Man and one of those ghosts that try to eat Pac Man!

And what, pray tell, was I going to dress as?

Bzzz, bzzz! I was going to be a bumblebee and I was going to make some sort of joke about Flight of the Bumblebee. Alas it was not to bee, and it was just as well because I saw three other people dressed as bees, like they were all from the same hive. Bees don’t fly in the rain though, which is why this little bee stayed under her umbrella.