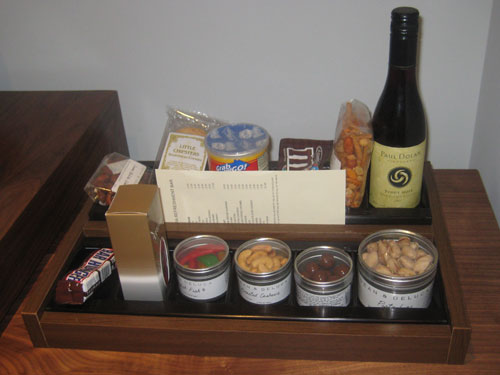 What wonders lie beyond the snack bar at the Nutrilite blogger event? Find out behind the jump (where there are no ads as mandated by my ad network agreement).

Disclosure: Nutrilite paid for my flight from Indianapolis to LA, two nights in a hotel and transportation to and from the airport and the bloggers event. They also provided some meals and free samples of their products.

So, before my bag took a tour of LA without me, and before my rental car got up close and personal with an armored truck, there was the Nutrilite bloggers event. I found a bag of Nutrilite goodies waiting in my hotel room, which was good because the highly priced and highly tempting snack bar was right next to my computer desk, taunting me with candy bars and wine. I chowed down on vanilla pretzel energy bars instead.

I’ve been lucky enough to have been invited to a few of these blogger junkets before, and there is still a part of me that is suspicious of every invitation, as if I am one email away from being duped and sold into a Russian sex slavery ring. Before I took off for LA, I joked to a few friends that they had permission to kidnap me for deprogramming if I came back trying to sell them vitamins. I was kidding…mostly. I’ve heard of travelers who go on free vacations sponsored by people selling time-shares, who have no intention of making a purchase, only to come back with a really bad real estate deal on their hands. Nutrilite is part of Amway, and while I haven’t had any personal experiences with that company, I am familiar with the stereotype of a pushy, overzealous, Amway salesperson.

What I’ve learned after attending several of these events is that the corporations we often think of as faceless actually have faces. Companies are made up of lots of people who all have their jobs that make the company run, but ultimately it all comes down to people. Blogger events like this let you meet some of the people in a company and learn what that corporation is all about. Of course, like any first date, everyone is on their best behavior with freshly pressed shirts and neatly combed hair, offering up handfuls of endurance gummy chews. (What? Is that weird?) But there is only so much you can fake, and after spending several hours with them, the people I met at Nutrilite seem genuinely focused on promoting a healthy lifestyle by creating the highest quality products possible. See? It’s even written on the wall of the Center for Optimal Health: 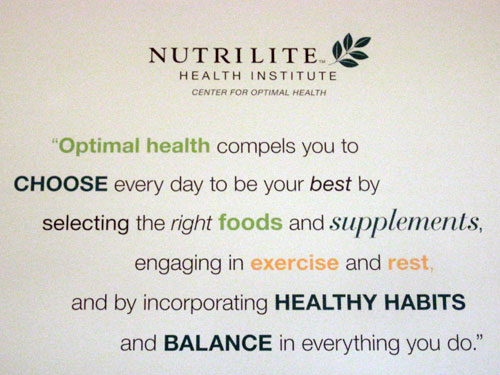 Which is right next to the kick ass, rotating, DNA spiral of health! (Would it be wrong to climb it?) 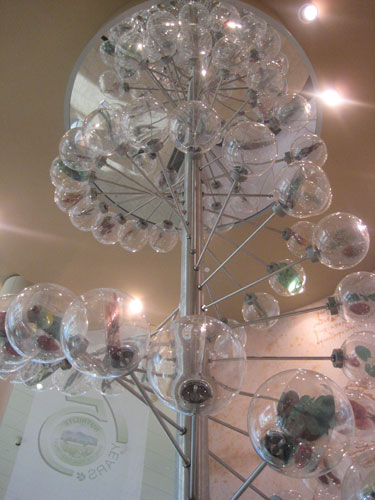 The day started out with a health assessment, the results of which I’ll be getting in a few weeks. After breakfast with the bloggers, we sat through several presentations, except for the presentation we ran, push-upped, and squatted through for 10 minutes of high-intensity exercise. It nearly killed me dead on the floor of the Center for Optimal Health. If I have to die, I would enjoy dying in a location that ironic.

I had never given any thought to where vitamin supplements come from, but a video shot on location at several farms showed what the process is like. Hint: It involves lots of acerola cherries (and not aerola cherries as I originally typed). The company earned my respect when I learned that Nutrilite never made a fen-phen product, even when their competitors were making piles of money off of it, because they believed it wasn’t safe. I asked how they maintain the standard of integrity that they aspire to, and they said a lot of the corporate culture bleeds down from the founder’s son, president and CEO, Dr. Carl “Sam” Rehnborg. After working for several corporations of various sizes during my career, I find it fascinating how corporate culture develops and varies from organization to organization. 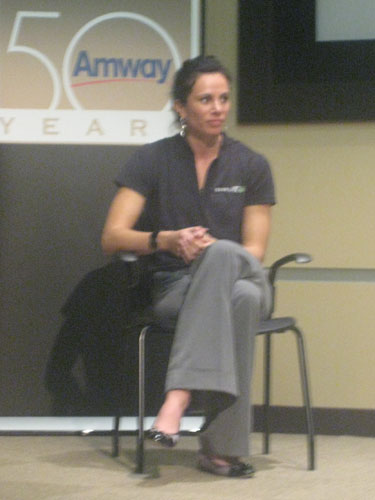 Two athletes talked with us, Tom O’Rourke, masters track cyclist, and Jenn Stuczynski, American female record holder in the pole vault. When she is not sprinting towards a mat with a long pole, she looks like she does pictured above. Other times, she looks like this:

She has an actual silver Olympic medal and I spoke to her! Someone should tell Chris Rock that his routine about keeping girls off the pole doesn’t apply in this situation.

One secret I discovered was that you don’t have to talk to a Nutrilite salesperson to buy their products. You can just go online to their store, order what you want, and the salesperson closest to your zip code will automatically get credit for the sale. 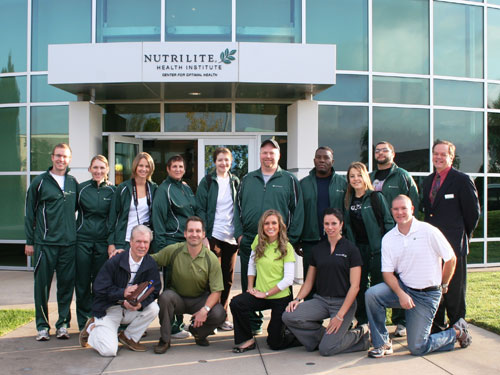 The best part of the event was getting to meet other bloggers. They assembled a nice cross-section of people and even had a balanced male/female ratio, which can be unusual in the health blogging world.

I’d already met Roni of Roni ‘s Weigh, and I’d talked before with John from John is Fit.

I had some great conversations with Evita from Evolving Wellness, and I’m looking forward to reading more of her blog which covers holistic health and wellness and balanced living.

It was nice to meet Isreal from Fat Man Unleashed who’s popped by this site before and Mark, a personal trainer from My Fitness Hut.

I also enjoyed talking with Steve and Sarah, a married couple who have his and her blogs at Steve in a Speedo?! Gross! and Rx: Ironman. And yes, they compete in Ironman competitions and there is a 99% chance they are in better shape than you. They’re the type of people who actually win 5K races and don’t just run them in hopes of finishing like I do. And despite all these many reasons to hate them, they were delightful people :) 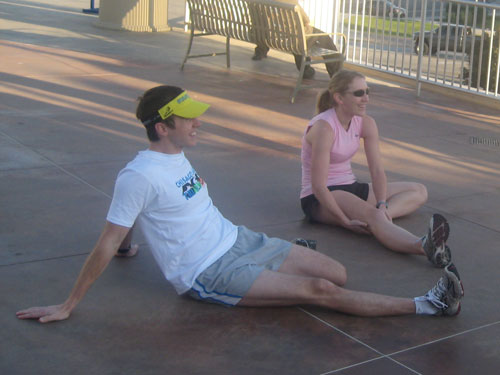 After the presentations wrapped up, we went back to Long Beach for a group fitness activity. I chose to walk along the pier with a few people, but another part of the group went for a run. An hour later, I hopped a bus four miles to the Queen Mary ship across the water. 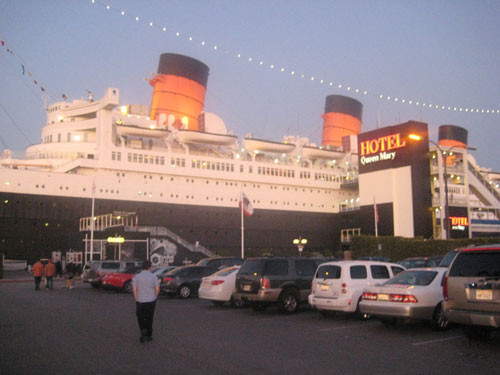 This is where I bumped into Steve and Sarah. They greeted me and asked me if I too had found the staircase that led to the freeway bridge that they’d taken over here. I paused. “Uh…no, I took the bus,” I said. I took the bus back too, because I am not an IronMan or an IronWoman. Steve and Sarah ran back and still had time after their 8-mile jaunt to take a shower before dinner. See? I should totally hate them, shouldn’t I? But I swear that they’re really nice people even if they make you feel physically inferior.

Meeting them made me think that it would be rather lovely to have a physically fit husband who’d go for runs with me and keep me accountable for staying in shape. He’d also do the laundry and cook dinner since I’m fantasizing here. After skimming through their blogs, I have a desire to read lots of training blogs. It’s interesting to observe the different attitudes between weight-loss bloggers and athlete bloggers, though that’s probably an entry in itself.

Anyway, that was that! I left with warm fuzzy feelings about Nutrilite, so I guess they succeeded in winning me over. However, I promise I’m not going to sell you any vitamins. No need to kidnap me for deprogramming :)

Later: Only in California