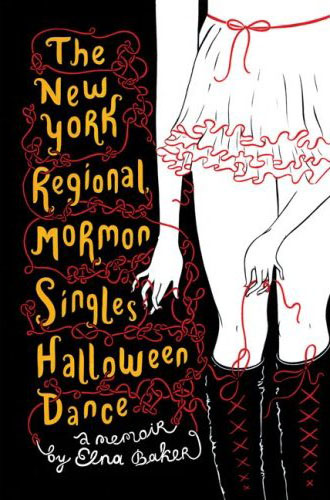 I was driving to Cleveland in the dark and I’d had a headache for half of Ohio, when Elna Baker came on my MP3 player. I had downloaded podcasts of The Moth, a storytelling show based in New York, and the latest episode featured the comedian/writer/Mormon recounting a family trip to Cyprus (which you can listen to here). My second reaction was, “Man, my family vacations only occurred at lame places (like Gettysburg,which is as interesting as you think a field would be) or predictable places, like Ocean City (love the salt water taffy). Why didn’t I get to go to Cyprus?” This was my second reaction because my first reaction was laughter, which helped me get through the rest of Ohio.

Later, I looked up information on Elna Baker and realized I’d heard her before, on This American Life where she told another funny, yet disturbing story, about selling dolls at FAO Schwarz. So, when I saw that she had a memoir coming out this October 15th called The New York Regional Mormon Singles Halloween Dance, I requested a copy to review, which is why I am typing this and you are reading this now.

The memoir is a humorous and moving tale of Elna’s life as a 20-something Mormon in New York who has lost 80 pounds. It’s peppered with some stories from her childhood, but the driving storylines of the book are Elna’s search for a boyfriend who doesn’t treat Mormonism like an STD, and her shifting relationship with her faith which is tested and changed by her experiences in New York City.

While I don’t subscribe to Elna’s particular beliefs, her descriptions of how she feels about her faith and the comfort it gives her were touching. It was refreshing to read a book by someone who is sincerely religious, but not preachy, and still has their sense of humor firmly in tact. I can tell that the Mormon community means a lot to her, but she’s also honest about the doubts she’s had about it and the problems she’s encountered with her faith.

But, don’t let that make you think this is a heavy book. It weighs less than a pound and contains many humorous, self-deprecating stories about Elna’s adventures. As I mentioned, she lost 80 pounds in her early 20’s, and then had to learn how to deal with men who never would have flirted with her before. She talks about her loose skin problems (as I have), and explains why she decided to have a tummy tuck. While I recommend the book, I do not recommend losing weight the way Elna did, which involved a crash diet and Fen-phen (though in her defense she didn’t realize that was what her doctor was prescribing her).

Overall, the book is infused with a childlike enthusiasm for the world and all the wonders in it. Where it occasionally stumbles in technique, it makes up for in spirit. Elna has a conversational writing style that is probably an extension of her stand-up comedy experience. She is unafraid to reveal personal stories that leave her vulnerable, an act I respect and admire.

The book is interspersed with humorous drawings and diagrams about Elna’s love life and beliefs at different ages. By the end of the book, things still felt somewhat unresolved, but that is probably because the author still wrestles with these issues herself. Anyway, this was a funny, pleasurable read and if you like the tone of my blog, you’ll probably like this book. It’s official release day is today, Thursday, October 15.

At the end I was left with only on big question. In one chapter she talks about making out with a famous guy she met at the sushi restaurant she works at in New York. She doesn’t give us the leading man’s real name, but he would be about 70-years-old, is an actor and a writer, married, and she says, “he’s up there with Robert Redford, Paul Newman, and Jack Nicholson in terms of classic sex appeal, age, and fame. Also, my all-time favorite screen kiss, one that I’ve watched over and over again, belongs to him.” It’s not Warren Beatty. The fact that she couldn’t say who it was has now made his identity far more interesting to me that it would have been otherwise. So, dear readers, please tell me, who did Elna Baker French kiss? I need to know! If we put our heads together, I know we can figure this one out. My best guess was Harrison Ford, but he’s not a writer.

Later: Blogger’s Secret #1: When you don’t want to write a real entry, post cat pictures instead!