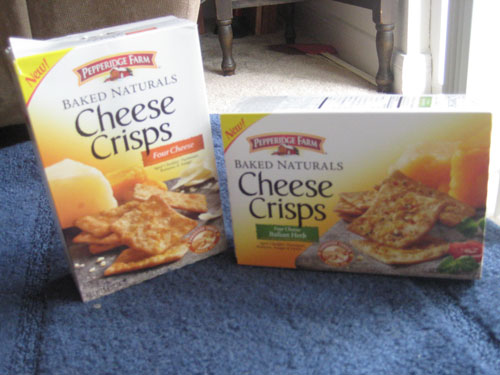 This is a compensated review from BlogHer and Pepperidge Farm Baked Naturals Cheese Crisps.

I looked around the room when I heard the crinkling sound, but didn’t see anything. I figured the cats must be playing with something, so I got up to look in the most likely place: the bathroom. That’s where I keep the cat box and the plastic bags that end up carting most of the kitty litter to the dumpster. Sometimes the cats paw at the bags. Still nothing. What else could be making that kind of noise? I walked back down the hallway to discover this: 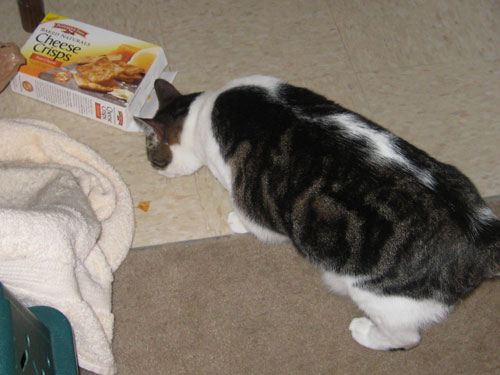 It was Officer Krupke, in the foyer, with the Cheese Crisps! I had received a few boxes of the Pepperidge Farm Baked Natural Cheese Crisps to review, but in my laziness had left the boxes on a table in the foyer as soon as I’d opened them. Officer Krupke had knocked the box onto the floor and was devouring the crispy, cheesy crisps as quickly as he could. I stopped to snap a picture and then put the crisps back on the counter.

When I returned from putting my camera back, they were at it again! This time Java Bean had joined the fray and they’d knocked at least 3 more crackers out of the box to snack on. This time I didn’t stop for my camera and put the crisps in the kitchen cupboard and crossed my fingers that my cats had not yet learned how to open doors.

So, the felines in the Fulda family have registered their opinion: two paws up! My cats are always after my cheese, be it string or ricotta or cottage. If Krupke and the Bean were around, a spider would be the least of Little Miss Muffett’s problems. Nom, nom, nom.

According to Pepperidge Farm, the Baked Naturals Cheese Crisps are natural, preservative-free snacks, made with an artisan blend of real cheeses golden baked to bubbly perfection on top of a thin, crispy, crunchy cracker. Four Cheese is made with Aged Cheddar, Asiago, Romano and Parmesan, while Italian Herb is seasoned with flavorful herbs and spices.

Krupke and the Bean seemed to prefer the Four Cheese flavor, but I thought both varieties were tasty. They were like a cross between Wheat Thins and Papa John’s cheese sticks. These crunchy munchies are delicious. However, when I eat crackers, I usually find myself covered in crumbs half an hour later, lying on the couch wondering why there is an empty cardboard box on my stomach. I love crackers, but it’s usually better for me if I eat them at a party as an appetizer, where the box is hidden in the host’s kitchen. You can view an image I scanned of the nutritional information here.

BlogHer and Pepperidge Farm are giving away a $100 Visa Gift Card. To enter, leave a comment below with your favorite kind of cheese. If you prefer, you can answer the question in a post on your own blog and leave the link in the comments below. The contest will begin on 10/5/2009 and will end 11/2/2009. Make sure that the e-mail address you leave is correct. If you want to increase your odds, visit other BlogHer Reviewers for seven chances to win a $100 Visa gift card.