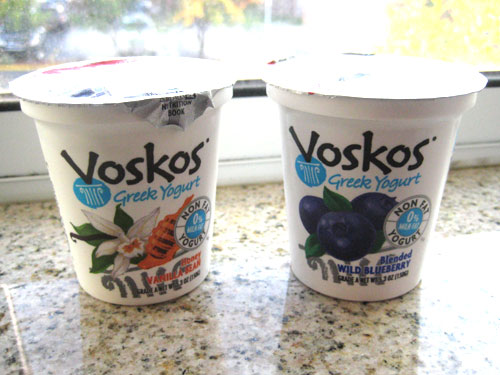 Disclaimer: Voskos sent me several coupons redeemable for their yogurt to write this review.

I didn’t start a blog with the intention of soliciting emails from all the major yogurt manufacturers in America, but I’m pretty darn close to achieving that goal. (Am I on some secret yogurt mailing list?) I’ve tasted Fage and StonyBrook Farm and Yoplait offered to send me samples too, but I turned them down because I’m not into the high fructose corn syrup they use. This month Voskos sent me some coupons, so the only major brand I think I’m missing at this point is Dannon, which is ironic because that’s the brand I buy most often.

Anyway! Since I reviewed the other yogurts, I thought it was only fair to give Voskos a go. I sampled several flavors of their Greek yogurt including the plain non-fat, plain original, honey vanilla bean, and blueberry. 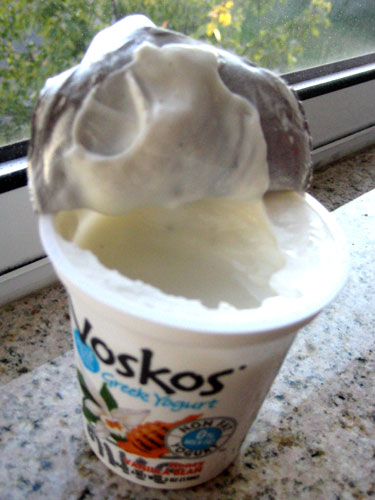 As I expected, the plain flavors were too tart for my sweet tooth. However, if I mixed in some sweetener they were more palatable. The blueberry and honey vanilla bean were pretty good, but again, there was that tart flavor mixed in that I’m personally not a huge fan of, but I bet some of you would enjoy. The flavors are pre-mixed into the yogurt, so you don’t have to spend time stirring them up. This also assures that the flavor is evenly distributed throughout the yogurt. According to their web site, they offer several other flavors of Greek Yogurt including exotic fig, wild strawberry, and greek honey. I didn’t see any of those in the Whole Foods store near me where Voskos is sold, though the fig flavor sounds interesting.

You can find a store that sells Voskos here or just hit your local Whole Foods if you have one. If you are interested, you can also try your luck winning one of 10 coupons Voskos sent me for a free cup of their yogurt. To enter, leave a comment below naming a new yogurt flavor you would like to try. Feel free to be creative! You have until 11:59pm on November 2 to enter. I will draw ten winners randomly.

Don’t forget, you can still enter the Pepperidge Farm $100 Visa card giveaway too if you haven’t already, which is also open until November 2. Good luck!

Earlier: Less than a year away