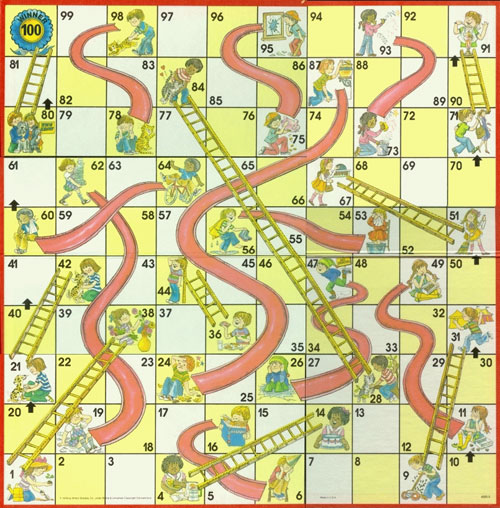 Chutes and Ladders was one of the board games I played when my age was a single-digit number, along with Sorry! and Candyland. While Candyland was a sugary, sweet fantasy world with candy cane forests and gumdrop mountains, Chutes and Ladders was more like reality because just when you thought you were ahead, life would knock you on your ass and you’d fall behind. For those unfamiliar with the rules, you’d roll the dice and then move your figure that many spaces forward. If the space you landed on had a ladder, you got to move up to the space the ladder pointed to. If you landed on a chute, you fell down to a previous space.

Last year, I felt like I’d landed on square 87 and slid down the long, long chute to square 24, and not just because those squares show the doofus who’s trying to sneak cookies from the cookie jar. Life was going pretty well. I was exercising and eating right and I’d gotten a shiny, new job and all was well with the world. Then I rolled the dice, landed on the “demon headache from hell” spot, and slowly slid, down, down, down to the “gain 40 pounds” spot. Ouch!

I’ve finally decided to do something about it, for real, and not just in a half-assed manner (no pun intended). There hasn’t been any single a-ha moment. I know people love those, but life rarely works like that. I’ve experienced growing displeasure with the numbers on the scale and my image in photographs. I’ve disliked buying larger pants and refuse to go up another size. I’ve been unhappy with my race times and the 1/2 size increase in my running shoes. I was featured in a Runner’s World article, which made me think that I should get back to a place where I can run an entire 5K, so I’m worthy of that article. I’ve looked at the calendar and realized I’m a little over a year away from 30, which is the age at which your metabolism starts to slow down, so if I want to lose weight it will only get harder the longer I wait. I recently talked to a friend who has lost 40 pounds and was very happy for her, but also thought, “I should lose 40 pounds too.” I generally don’t mind being a weight most people consider “fat” because it’s thinner than I’ve been for most of my life, but I have been moving towards a weight where my size does bother me, and I do care enough to actually do something about it. And, most importantly, the headache has been playing nice lately, and I’ve felt like I finally have the energy to accomplish things again.

All of this has culminated to make me say, “Ok, I have to lose weight, for real now, with actual goals and accountability and stuff.” I have tried exercising only 3 days a week and eating basically healthy except for the 20% of the time when I don’t. I’ve tried saying, “Eh, it’s just a pound. Who cares?” It has not been working. I wish it would work, but it doesn’t. Insert sad violin sounds here.

I have set a reasonable, yet measurable goal. I want to lose 10 pounds by the end of the year and another 30 pounds by the end of June next year. This amounts to losing about a pound a week, which is realistic and won’t make me crazy for a cheeseburger by week three. I’ve been tracking my food in SparkPeople, which is annoying, but helpful. On the first few days I would look at the screen sadly and say, “I’ve already eaten 1800 calories? For real?” I have spent many a night resentfully munching on carrots. Oh, vegetables, how you taunt me. I am challenging myself to exercise for 30 minutes a day, six days a week. It can be something simple, like walking, or it can be weights or Pilates or running, but I have to spend at least 30 minutes off of my ass. Again, this is reasonable, but not so much work that I’ll burn out.

I never stopped tracking my weight, so I’ll keep doing that. I’ll let you all know how it goes, even though I have no plans to weigh in here every week. As for how I feel about all this? Eh, it is what it is. I lost weight. I got sick. I gained weight. I got sorta better. Now I’ll lose weight again. I’m not mad at myself or overly happy about the whole thing. Mostly I just see a lot of work up ahead and feel like it’s time to get down to business. There’s no use in whining if you fall down a chute. You just pick up the dice and roll again. Lead me to the treadmill! I suppose I feel that way because, as I said before, although I am fat, I’m still thinner than I’ve been for most of my adult life. Things have been a lot worse than this.

I’ve noticed a change in the past few weeks, not a physical one, but one inside my head. I feel like I’m in a different mindset now. Some of it comes from the fact that I’m exercising every day, and every time I run or lift weights I’m reminding myself that I have this goal I want to achieve. The exercise also gives me a bit of a buzz, which I think helps keep the headache down too. So even if I didn’t care about being fat, I’d have incentive to run so I wouldn’t be in as much pain. I might still be a slow runner and I might be lifting piddly-dinky lil’ weights, but I know if I keep at it I’ll move ahead on the game board. I’ll cross my fingers that I land on the ladders this time, and not the chutes.

Later: A podcast, a giveaway, and congrats!