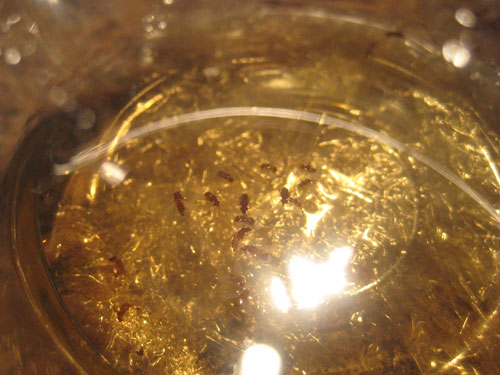 Whoever said you catch more flies with honey than vinegar never had a fruit fly infestation. I hate fruit flies. I hate how the little specks fly in front of my computer screen while I’m writing, distracting me from my train of thought. I hate how quickly they zoom away right as I’m about to squish them against the wall. I hate how I start clapping, like I’m happy and I know it, trying to murder the little demons. I hate fruit flies more than I hate Jennifer Westerfelt, the bully from 2nd grade who tried to steal my 25 cent plastic ring I’d gotten from the grocery store vending machines.

The tipping point came when I visited my brother in North Carolina. We sat down to dinner in their lovely new house, and who came to join us? The fruit flies! My first thought was that they’d traveled with us from Indiana, stowing away in the nectarines I’d packed for the trip. Then I realized North Carolina has fruit flies too, and these little pests were just native to this area and not interstate hitchhikers.

After complaining on Twitter, both wvclaylady and elvisngraceland advised me that I could trap the little beasties with a bowl of vinegar. I poured white vinegar into a bowl, placed saran wrap over the top, and poked a few holes in the plastic with a fork to help trap the flies inside. I placed it by the trash can, where they like to congregate, and four hours later there were no flies in my vinegar.

I gave up for a day, but every time a fruit fly buzzed in front of my screen, I became more annoyed and decided my mission in life was now to eradicate this species from the face of the Earth, or at least from my apartment. I Googled some more and tried an apple cider vinegar trap this time, placing the bowl next to some flowers my roommate had bought that had become the fruit fly equivalent of a happening night club.

An hour later I checked the trap, and behold, there were 8 dead fruit flies in the vinegar! One was still alive and swimming helplessly in the liquid, unable to fly out or crawl onto the side of the bowl because of the surface tension, until he eventually drowned. I started checking the trap every hour, gleefully, now so obsessed with murdering fruit flies that I could be considered the Ted Bundy of their species. As of today, I’ve caught and killed over 30 of the little buggers. Bwa ha ha!

Not only that, but Java Bean got a fascinating new toy out of the project. He sat there staring at the pests for almost 10 minutes! Perhaps I should get him an ant farm for Christmas. 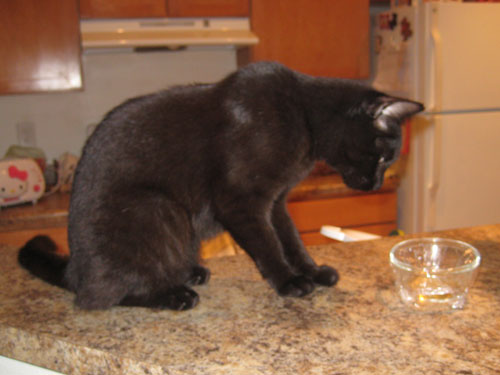