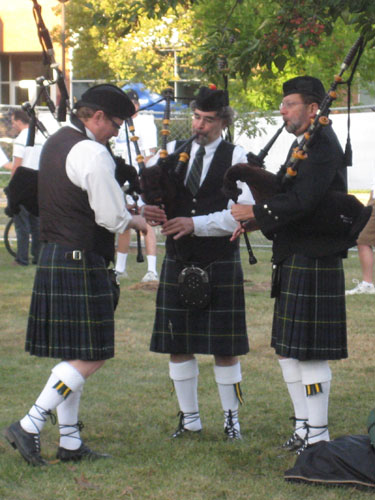 Unlike my first running of the IrishFest 5K, I didn’t witness an unofficial “Escape The Cops 5K” on my way to the starting line. This year’s race also wasn’t at night like the one two years ago was, so they did not hand out any glow sticks :( But by God, there were bagpipes!

I sat on a folding chair waiting for the race to start, when a thirty-something man in a grey shirt and square-frame glasses came up and said, “Excuse me, but do you know what pace you plan on running?”

“I have no idea,” I told him honestly. I haven’t been tracking the distance I’ve been running while training, just the amount of time I spend running. “Maybe a 12-minute mile pace?” I said optimistically recalling my average pace a year and a half ago.

“Do you mind if I pace off of you? I haven’t run a 5K for almost two years and it would help a lot if I could pace myself with somebody.”

“I just thought I’d ask you…because you still have a jacket on,” he said, though I wondered if he really meant, “because you’re heavier than most of the other freakishly lean and well-muscled people here.” It was about 60 degrees out, yet many of the hardcore athletes were only wearing their running shorts and t-shirts. Either way, it made for the second time someone has propositioned me to be their running buddy because I’m a slow runner; the other person was a woman on the nature trail about 2 or 3 years ago.

So that is how J1m H0gan and I ran the IrishFest 5K together, though I have obscured his name in case one day an employer Googles him and decides they simply cannot hire a slow runner for a job. For the first 25 minutes, we did intervals of 4 minutes of running and 1 minute of walking. Then for the rest of the race we did intervals of 2 minutes of walking and 3 minutes of running, finishing in 44:12, which is over three minutes faster than my last run, which goes to show I perform much better when it’s not hot and humid with no water stations in sight. I brought my own water bottle this time too, and the cool weather was much more pleasant for a three-mile run. I wasn’t sure if I’d like running with someone, but it made me accountable to stick to the intervals I’d set. Otherwise, I might have chipped 20 or 30 seconds off the running intervals because no one would have known one way or the other.

My best 5K time ever was 31:17, and I remember at the time thinking it was still rather slow because the fastest runners could finish in about 15 minutes. Comparing it to my current time of 44:12, it looks downright speedy, and I finally understood my aunt who once commented on how good that time was. I suppose it’s like how I used to look at old photos of myself from high school, a time when I felt HUGE, and realized I hadn’t been that fat at all.

I improved on my last time, which was my goal, and ultimately I’m only competing with myself. After the 5K I went online and signed up for another race scheduled in about a month called Run Like Hell. It’s held at night on the day before Halloween and the participants are encouraged to dress up for the occasion. Looking at last year’s photos of people dressed as everything from a school bus to the three little pigs, it appears to be a hell of a lark. Anyone got an idea for a costume that might win me a prize, but that I can also run comfortably in?

Later: King Tut in Indianapolis (with narration by Harrison Ford!)