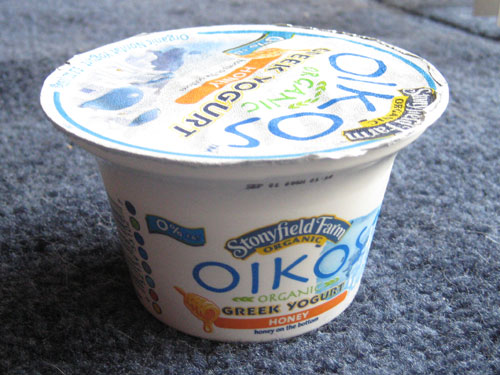 PastaQueen reviews the Stonyfield Farm Oikos Organic Yogurt, reminisces about her grandparents’ farm, and gives away coupons, a pot holder, and a spatula.

Before my grandparents died, they bought the farm. After years of living in a small house in Princeton, Indiana, they purchased several acres and a farm house which I would visit back when I was only as tall as the kitchen counter. They had blackberries that we helped pick. They had cows that gave you mean looks. They had a creepy bathroom that was more frightening than any rest stop’s facilities. They sold eggs on the front porch whose shells were not a uniform white, but also brown and beige. The farm was dirty and odd and different from the city where I came from, but it was memorable and it had tractors. My best memory of my grandfather came when we were walking through the chicken coop together, gathering eggs, and he lifted up a chicken off its roost and tossed it halfway across the room. Who says a chicken can’t fly?

When we ate at my grandparents house, the food was different. The chicken wasn’t as plump as the ones from the stores. The green beans tasted nothing like the frozen veggies we got from the grocery. However, the angel food cake was delicious, thanks to the eggs from those flying chickens. I wish I could try eating those foods again, because what tasted weird and funny to my eight-year-old tastebuds might taste sweeter or more savory now. I didn’t know it, but I was eating organic food which was grown close to the earth like people had done for centuries before me. My parents had a farm, not a factory.

I saw the movie Food Inc. this weekend, and I recommend that anyone who had a problem with my cannoli entry never, ever see this movie or else you will have to retroactively vomit 80% of everything you have ever eaten. The film exposes the predatory business practices of the meat, corn, and soy bean industries, shows disturbing footage of how our food is made, and probably also has a negative effect on concession stand sales. It shows how food is grown in factories, not farms. It’s gross, really, really gross. If my grandparents had owned a chicken factory instead of a hen house, I would not be reminiscing about the good times I had picking up chicken corpses smeared in feces. Overall, the film emphasized the importance of organic foods to me in a way that ramblings from hippies never really has.

One of the “good guys” interviewed in the film is Gary Hirshberg, CEO of Stonyfield Farm and reformed hippie. He seemed like a genuinely nice guy who takes a bit of twisted joy from getting organic products onto Wal-Mart shelves. This reminded me that Stonyfield Farm had sent me coupons for their yogurt several months ago and I’d never done a review because my life got hectic. Last month I finally decided to grab some of there Oikos Greek Yogurt to review, but because I had moved to the south side of town, far away from the Trader Joe’s and Whole Foods and Fresh Market, I couldn’t figure out where to buy it. Then a friend let me know that Kroger has a secret organic foods section away from the other foods, as if not to contaminate the organic yogurt with aspartame. So, if you can’t find this stuff in the yogurt section like I couldn’t, search for the organic section of the store. 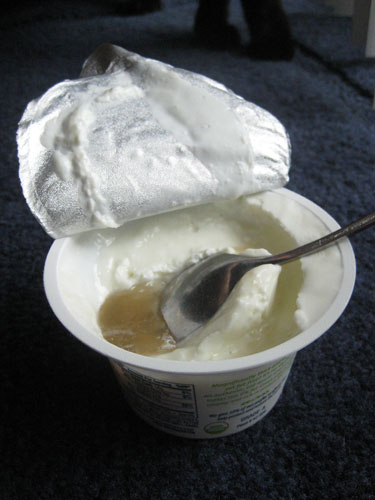 I tasted the Oikos Greek Yogurt with Honey because I knew the tart taste of plain Greek Yogurt alone would turn me off. The honey is located at the bottom of the yogurt cup and you can mix it together with a spoon. It was yummy and the kitties licked the container clean. Like most Greek yogurt, it’s thick and creamy. It’s also nice to know that the cows that helped make the yogurt were like the mean cows on my grandparents farm and not the corn-fed cows writhing in their own manure like in the film. 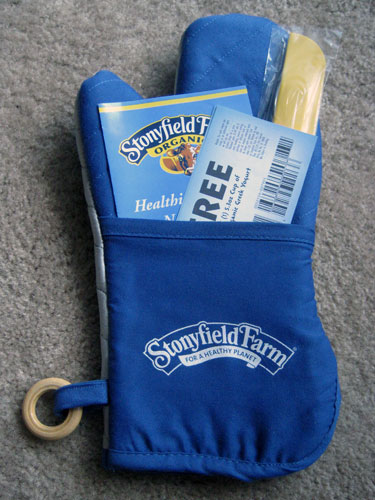 Stonyfield Farm is giving away one prize package that consists of an oven mitt, a spatula, kitchen magnet and coupons for free and/or discounted yogurt. To enter the giveaway, leave a comment on this entry naming what your favorite farm animal is and why by Wednesday, August 5th at 11:59pm. A winner will be drawn randomly. US entries only please, because I don’t think the coupons will work in other countries. If you don’t win, it looks like they also give away coupons on their web site here.