One of the advantages of being self-employed is that you can sit in front of your laptop obsessively refreshing a Twitter page in hopes of winning free concert tickets without fear of being discovered by your boss. The @IndyStateFair Twitter page has been giving away free tickets to various events this month. You just have to be the first person to direct message them with the correct answer to a trivia question. When I saw that they were going to give away tickets to the Journey concert with opening act Heart, I opened up one browser window for the direct message and another with the Twitter feed to refresh every minute waiting for the question.

I didn’t expect to win because I don’t know any much Journey trivia, but after about 10 minutes I hit refresh and was startled to see the question appear, “Which current reality show judge was a member of Journey from 1986-87?” I haven’t watched American Idol since season two, unless you count the weekend I watched every Adam Lambert video online (OMG, Adam I luv u!!!!). However, when I did watch it, I remember judge Randy Jackson mentioning once or twice that he had worked with Journey. I typed the answer as quickly as my fingers let me and hit send, fairly certain someone had refreshed the page and answered the question before me.

Then this popped up, “WE HAVE A WINNER! Congrats @pastaqueen!” And that’s how I ended up going to the Journey/Heart concert with my mom. 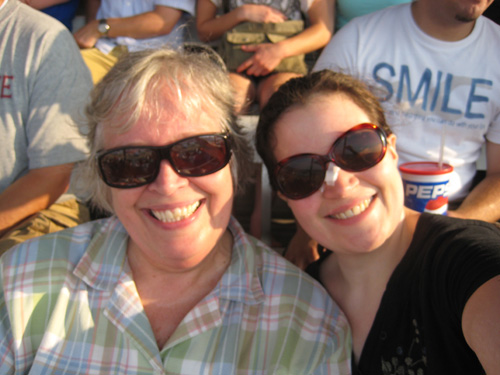 I asked a few of my friends if they wanted to come along, but they were all either busy or not interested. I mentioned this to my mother, who surprisingly said she’d like to come. My mom didn’t know who Journey or Heart was (and probably still doesn’t), but she was game for a rock concert, so off we went. As we walked through the state fair on the way to the grandstand, Mom pointed out the building without air conditioning she’d lived in for two weeks in the 60’s when she got to do 4H camp at the fair. All the girls in 4H camp wore white dresses and walked in two lines like in the book Madeleine. I am not making this up.

The concert started about 15 minutes late, but everyone got excited when the Wilson sisters of Heart took the stage. Here they are in my artistic homage to Impressionist painters: 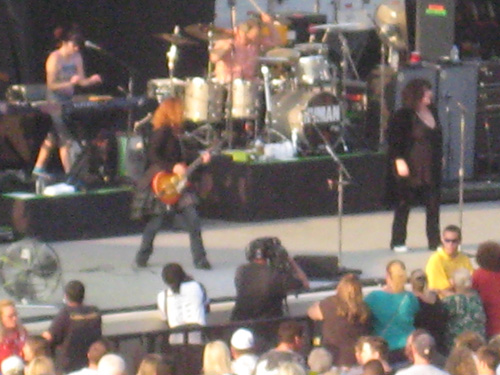 They opened with “Barracuda” and then went straight into “Never.” By the time they played “These Dreams,” I thought they’d played all the songs I knew, but evidently I know a lot of Heart songs and didn’t know it. When the guitar started playing the opening of “Magic Man” I thought, oh yeah, that’s a Heart song too. Same thing when they sang “What About Love.” By the time they sang “Crazy On You” I was wondering why I’d never bought a Heart greatest hits album because I knew over half the songs in their set.

When Ann Wilson broke out “Alone” the crowd went crazy hooting and hollering and a guy started waving around his big banana. That’s not a metaphor. 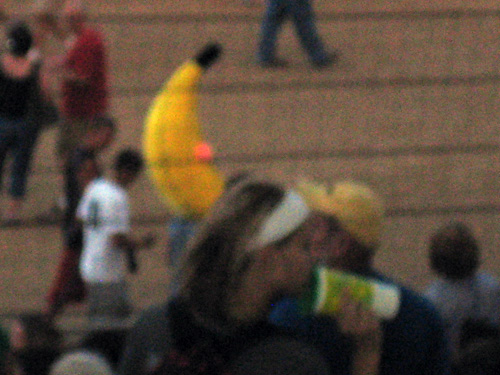 I suspect bands must have mixed feelings about their megahits. Sure, it must be awesome to go around the country and have people literally jump up and down and scream in excitement about something you wrote. But I can’t imagine singing the same song at state fairs for the past 20 years. Wouldn’t you want to murder that song eventually? I looked up Ann Wilson on Wikipedia, and she’s about the same age as my mom. I’m trying to imagine my mom touring the country in a rock band right now and coffee almost snorted out my nose. (No offense, Mom. I’m sure you could rock it out if you wanted to.) So mad props to Ann Wilson.

I felt complicit in the act too, because even though the other songs were fine and all, I really just want to hear the megahits I know. That’s why I wasn’t as excited during the Journey portion of the concert, despite the new front man, who was fairly awesome. I’m certain he got more of a workout leaping around the stage and jumping off of the stairs and tossing his microphone and catching it one-handed than I did through my entire 5K last Saturday. (They were kind enough to provide him with water though.) I only recognized about 4 or 5 songs. One of them was, “Open Arms,” where I discovered people no longer hold up lighters, they hold up the glowing LED screens of their cameras. How 21st century of us. I’m sure the fire marshal approves. 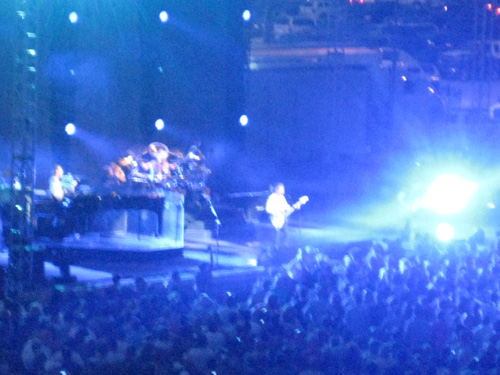 My mom and I left before the encore and screamed our order for deep-fried zeppoles at the vendor because we couldn’t hear. Then we rode the tractor train back to the parking lot by the flashing lights of the Midway. I love the fair!