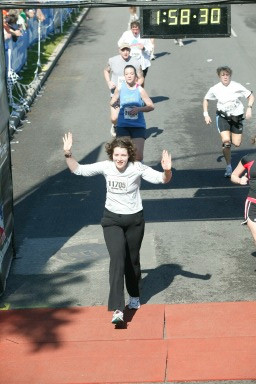 I used to exercise because I knew it was the only thing keeping the world from exploding. I would dash onto the trail immediately after work so I would have enough day light to complete my runs. I would lift weights as I watched Good Morning America. I did Pilates so much I found myself able to roll backwards and then leap up off the mat. I did this for months and months after I got my horrible, awful, no-good headache. I did it because I knew if I didn’t the universe would collapse and we would all die, because it was only the force of me exercising five times a week that was preventing total world annihilation.

But after about 8 months of the pain and the pathetic push-ups, I stopped. The running shoes stayed in the closet and my Pilates mat stayed in the corner and my weights just stayed put, period. And the world did not explode. The universe did not end. This was a very bad thing to discover. I needed to believe exercise was non-negotiable, but when it wasn’t, I started negotiating. I began to do what I wanted to do instead of what I needed to do. This usually involved ice cream and prime time television.

I’ve been feeling a lot better now and I’ve been walking regularly, but I am no where near as fit as I used to be. I have known I need to work on working out more, but I’ve lacked the spark I had during my running years to make it happen. Even my behavioral psychologist at the headache clinic has been on me about it, listing all the benefits of regular aerobic exercise, and making me giggle inside my head that someone is giving me weight-loss tips.

Then Kelly emailed me. You might remember Kelly from page 8 of my book, where she appears as Karen, my abs-crunching college roommate. I didn’t know how to contact her for permission, so I changed her name in the book to protect her identity (though I doubt anyone would be embarrassed to appear as the health conscious roommate in a weight-loss memoir). Kelly would work out in our dorm room and I would watch while I ate Twinkies. Like everybody and my father, Kelly is on Facebook, which is where we found each other again and decided that we’d enter the Midsummer Night’s Run, a 5K race held in Lexington, KY on August 15, 2009. Kelly’s wanted to run it for years and I need a clearly defined and measurable fitness goal to work towards, so we have submitted our money and are registered.

The race is 10 weeks away, which gives me enough time to complete the Couch to 5K running program. Developed by the Cool Running web site, Couch to 5K gets you from the couch to a 5K in nine weeks, though in my case it should be “Loveseat to 5K” because I don’t own a full couch. Many people have raved about this program, but I never got to try it because I’d already started running regularly before I’d heard about. Now I can test it for quality assurance!

I downloaded some podcasts linked from this Couch to 5K resource page, loaded up my MP3 player, and completed the first run on Saturday. To my surprise, I didn’t have to scrape my lung off the pavement like dog doody! It was actually…easy. I am not as out of shape as I thought I was! Woot! I was tempted to push harder and longer, but the program specifically tells you not to do that, so I was a good little girl and eased off. I’ve got 10 weeks to go and there’s no sense in burning out or injuring myself.

It felt surprisingly good to run again, making me feel more connected to the planet and to my body and myself. When I was at my most fit, I knew that I could get up and run a 5K whenever I wanted to. Just knowing that made me feel, well, kinda’ badass, oddly enough. Yet I know that at this moment I would not be able to run a 5K, though I could walk one. I’m looking forward to getting back to that level of fitness, and to keeping the world from exploding.

Later: Attention all do-gooders: Sponsor my 5K race and get a link

Earlier: Flying into the future