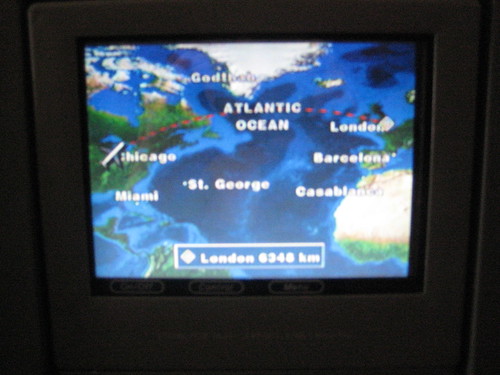 I no longer have to breath deeply and grip the arm rests when the airplane takes off. I do not focus on the flight attendants as if they are explaining the meaning of life when they demonstrate how to put on the oxygen mask. I’ve traveled several times over the past two years and each trip has made me a little more confident and a little less uneasy to take to the skies.

However, I was a bit worried about that middle section of the flight path illustrated above on my most recent flight that crossed the vast Atlantic Ocean. When we took off from Paris, I could gaze out the window below to see ships skating across the water like toys in the bathtub. Then we coasted above the clouds and I was glad because I did not want to see the vast emptiness that would await us if something went wrong, knowing no one would be there to help us but ourselves.

So when Air France flight 447 disappeared and eventually the wreckage was found, I felt so sorry for the passengers and their families because I had feared the same might happen to me only two weeks earlier. I didn’t fear it enough to cancel my trip or take a long sea voyage instead, but I knew it was a remote possibility, just as I know I could die every time I buckle my seatbelt and drive to work. It makes me wonder, which picture of me would they have shown on TV? What would Brian Williams or Charlie Gibson or Katie Couric say about me in my brief two sentence obituary as my face flashed on the screen? Would they dig up archival video footage of me appearing on their morning shows? Would my book sales suddenly sky rocket? And even so, is having a best-selling book really worth dying for?

More importantly, what would I want them to say about me? I’m not sure, but it reminds me that you should not wait to start living the life you want to live. I don’t know how many tomorrows are in my future, but I hope they are all good ones.

Later: Technically it should be “Loveseat to 5K”