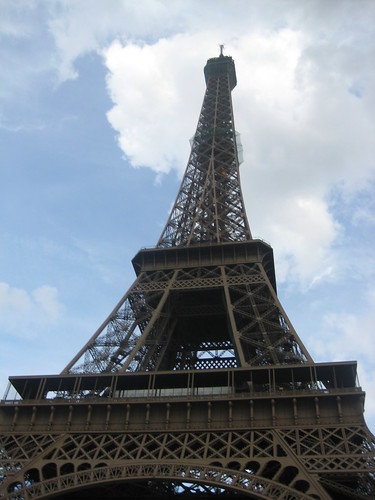 “London or Paris (choose one). Which city did you like better? Why” – Mary Jo

Hmmm, this is like asking me which piano-based musician I like better: Ben Folds or Tori Amos. One is a flame-haired, kooky, piano goddess and the other is a charismatic, geek, rocker. I like them both for very different reasons.

I like that they speak English in London, or at least some variation of English. Despite the fact that there are no trash cans downtown, London seemed cleaner than Paris. I found the London tube to be easier to navigate and prettier than the Paris Metro, which was grimier and not as well labeled. I also disliked the little rectangular paper tickets you have to use in Paris, which littered the ground at many stations.

However, London was much more expensive than Paris. By the time I was ordering my first lunch in French, I was relieved by the much lower prices. The French food was better, allowing me to sample tarts, chocolate bread, crepes and other naughty carbohydrates. Paris was also home to the delicious Kit Kat McFlurry, but I never went into a British McDonalds, so it’s possible they have it too. London was home to the most amazing food halls and I probably left some drool on the glass cases there. I fell in love with Parisian coffee. They serve it on a saucer with two cure sugar cubes which I delighted to stir into my coffee. When I took my last sip, it was extra sweet, flavored with the remainder crystals. I also liked the French attitude that you should sit and enjoy a meal. I only found the lack of to-go coffee annoying because I was trying to do a lot, but I think if I lived there I would like the slower pace.

Both cities are beautiful. Big Ben and Westminster Abbey are shiny and beautiful and I wanted to scoop them up to put in my pocket. Paris has quaint, winding streets with narrow sidewalks everywhere, making it very walkable. Standing at the top of the Arc de Triomphe you can see the streets spiral out, which made me appreciate how well planned Paris is. I also love how the city is painted in a consistent white, pastel color. You can walk along the river in both cities, and both have many lovely public parks to people watch in. Both cities have lots of museums, which are free in London but not Paris.

When I departed from Paris, I felt like I’d left more undone than I had in London. I suppose if I had to pick a favorite, I’d go with Paris, but I would probably enjoy it more if I spoke French. A bientot!