I started out Tuesday by not killing my roommates which is always a good way to start the day. Their near death was not due to the fact that they turned on the lights at 4:30 in the morning, but because the bunk beds at the hostel look like this. 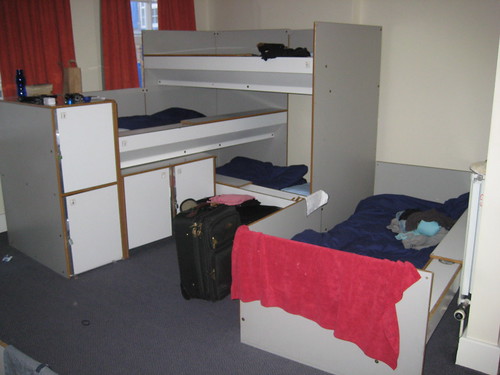 I was assigned the top bed, assuring I get a workout not only by walking all around town, but also by simply going to bed. I took off my socks to get better traction on the bed’s siderails and climbed down without waking anyone up. I am an acrobat! I suspect this maneuver is included in a typical Cirque Soleil audition.

I’d carefully laid out all my clothes and a baggy of my pills the night before, so I was able to quickly change clothes and walk across the Millennium Bridge at eight o’clock in the morning with hundreds of other Londoners on their way to work. I was amazed we were not all blown off the bridge and into the Thames. If I’d known it would be this windy, I would have brought a fleece, but I am managing with my windbreaker.

I strolled through Borough Market, which was closed, but that was probably good for my wallet. I peaked into several stalls, but only 2 or 3 were open. The market is most active on the weekends, a time I will not be there, so I was left to imagine what it must be like when it’s bustling and people are buying organic fruits and being robbed. 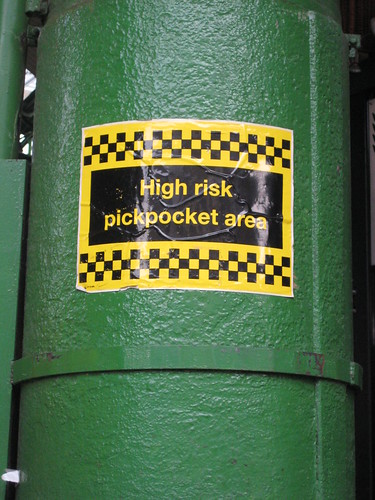 I popped into a little deli called Little Dorritt for a coffee and a sandwich and had a cultural experience. I know the woman behind the counter was speaking English, but if my life were a movie I would have turned the subtitles on. She seemed amused by me because her mouth turned up slightly in a grin after I’d replied, “Yeah” two times to her questions in a very American “accent.” Then she continued speaking like Charlie Brown’s teacher while pulling out a loaf of bread and looking at me questioningly. “Yeah, white,” I told her even though I would have preferred a wheat bread but didn’t think we could cross that communication barrier. What if they don’t even call it wheat bread here? Then she asked if I wanted it for “take away” instead of “carry out” as we Americans do, after which she put in on a paper plate and THEN put it in a bag and I left while drinking my coffee, which was quite good! I also learned that I love having cucumber on my sandwich! It added crunchy delight to my day.

I continued people-watching while walking and eating because I am a master multi-tasker. I followed the hoards across London Bridge, finished my coffee and walked and walked and walked and COULD NOT FIND A GARBAGE CAN. In desperation I started thinking to myself I will even call it a damn rubbish bin, but could I please, please, please find a receptacle for my empty paper cup? I got all the way to the Tower of London before my chant was answered. Later on, London resident and blog reader Katherine told me over lunch that they got rid of all the trash cans because the IRA used to put bombs in them. I can’t say that I blame them.

The Tower of London was much more interesting than I thought an old castle would be. I took the guidebook’s advice and headed straight for the crown jewels and happily skipped through rows and rows of line barriers with no people lining them. It was like an empty ride at Disneyland. I only stopped to watch video of Queen Elizabeth’s coronation video and view other education things before drooling over the bling. My favorite item was the royal punch bowl. I do not kid. There is a huge vat used for serving wine at parties.

After looking at the shiny things, a yeoman, aka a Beefeater (as they’re nicknamed), led us through a tour and then I climbed lots of stairs in the white tower at the center of the edifice. The most interesting part of the Henry VIII exhibit there was that they included his measurements as he aged and gained weight over the years. You can’t really make adjustments to a suit of armor, so Henry had is skinny armor and his fat armor. I don’t think he kept them in a box in the closet like where I hide me fat clothes and skinny clothes. 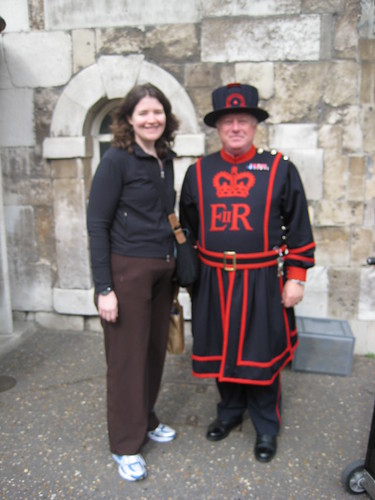 I then walked to the Cinnamon Kitchen, a modern Indian restaurant where the waiters speak…French? That’s what the accent sounded like to me. I didn’t get lost either, which was amazing because I find London difficult to navigate. The streets are windy and they don’t have poles on every corner with street names like we have in America. Instead, the street names are bolted on the outer walls of the buildings, but there is not always a sign at every corner, leading me to get turned around like a spinning top.

Cinnamon Kitchen was a recommendation from Katherine, a blog reader originally from Australia and now living in London. It was fun to talk to someone over lunch. Thanks for the invite, Katherine! I know some of you also left invites in my original London and Paris thread, and I apologize for never responding to you. It’s been rather crazy scheduling things in and people really started crawling out of the woodwork in London. I didn’t know so many of you lived there!

After dinner, I got overconfident on the tube and took the wrong line on the way to Westminster Abbey, delaying my arrival by 10-15 minutes. I slipped in 70 minutes before closing, which was 10 minutes before they stop people from entering. I felt a bit rushed, but the audio tour and my Rick Steves guide were excellent and I felt like I got to see everything, including choir boys playing basketball behind a wrought iron gate by one of the gardens. Westminster Abbey is so amazingly detailed it is impossible to take it all in, but I did what I could. The odd thing about Westminster is that you’ll be wondering around and then someone will point out that you just walked over Charles Darwin’s grave. I traipsed over a lot of dead people without realizing it. 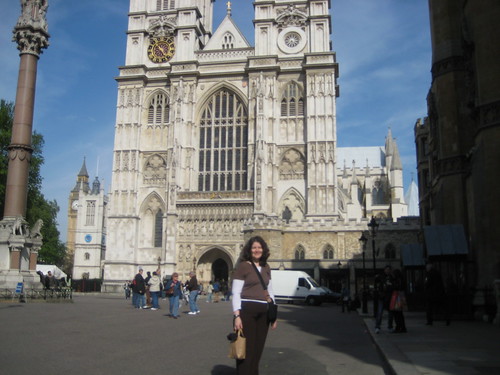 The abbey closed at 4:30, but I got back in for free at 5:00 for the evensong service. Do you hear that thud? That is the sound of my mother falling off her chair at the thought of me attending a church service of my own free will. I had a crappy seat near the back where I could not see the choir boys, but I could see the bust of William Blake giving me the stinkeye through the whole service. I would have taken a photo, but photography is not allowed in the abbey. I thought of sneaking a photo, but didn’t out of respect to the church and because an altar boy was watching us the whole time.

Then I stopped by the Parliament building and visited the Stranger’s Gallery (no the guest’s gallery) at the House of Lords, where they were talking about a fishing bill, which is just as boring as it sounds. The building itself was ornate and lovely, a contrast to Westminster Hall which you walk through to get there which is very simple and old.

I was pretty tired by then, so I headed back to the hostel, this time using the correct train. I had dinner at a Pizza Express, only because Indianapolis has a Pizza Express chain and I wanted to compare these two twins. Indy’s Pizza Express wins hands down. This place was sort of fancy, with thin crust pizzas. If I’m eating pizza, I prefer a casual dining experience with lots of grease and cheese.

I chilled out in the hostel’s common room at the end of the day to write my blog, when I discovered I’d timed my vacation perfectly. Eurovision is on! For those of you not in the know, Eurovision is song-writing competition between 40-something European countries. It attracts the most bizarre, overly theatrical acts, frequently clothed in spandex and glitter. This is why it is awesome. The semi-finals did not let me down. There was a bizarre group from the Czech Republic dressed like comic book characters. The lead singer was even wearing a cape. Another country had two performers on stilts dancing across the stage, and then the man on stilts grabbed the woman on stilts “feet” and twirled her around in a death spiral. There were also some genuinely talented acts. Right now I’m rooting for Iceland, which entered a 17-year-old singer who’s got real skillz. Go Iceland!

BTW, I haven’t had time to read the comments on any of my travel entries, and probably won’t until I get home. So if you have asked and questions or made any recommendations, I’m not going to get back to you anytime soon. Nothing personal. I’m on vacation, which includes a vacation from my inbox.