As many of you know, I have had a constant headache for over a year. After contacting countless doctors, healers, and Internet crackpots, I have finally discovered the cause of my headache!

As I was lying in bed last night, the normal tension in my head became particularly intense. I tossed and turned as the pain became unbearable. I got out of bed to plod to the bathroom when suddenly I fell to the floor in agony and heard a loud popping sound. I blacked out, but when I regained consciousness, lying there on my chest was…a rare Portuguese tree frog! 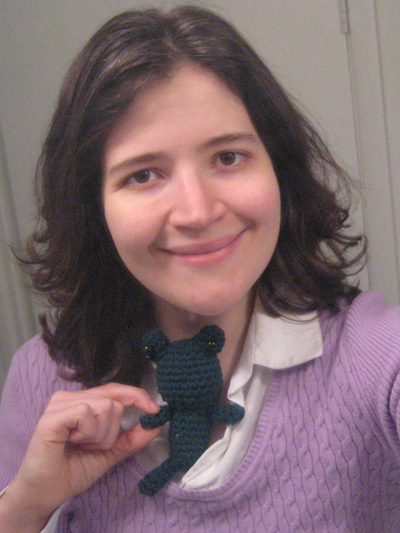 “Hello, my name is Bob,” he said in Portuguese, a language I speak fluently after my year abroad as a Brazilian tango instructor. “Sorry to have been such a pain this past year,” Bob said. He then explained that he had dropped onto my head when he was only a little seedling, and had spent the past year incubating in my nasal passages until he was ready to spring forth out of my head like Athena, bursting forth from Zeus’s head. As it is commonly known, Portuguese tree frogs eat boogers for sustenance.

“But why didn’t you show up in the MRI or the CT?” I asked him. Bob laughed, mocking humans for their inability to fluctuate between dimensions and avoid detection by traditional scans. Then Bob made me a tasty breakfast omelet with extra feta as a way of apology. As he headed out the door in search of his fortune, he turned around and said to me, “April Fools!”

Sorry, y’all! I couldn’t help myself. You may proceed to throw virtual tomatoes at me. I usually hate April Fool’s tricks, but couldn’t resist making fun of my stupid headache today. Try not to get fooled again, k?

Earlier: How do you make money fast?