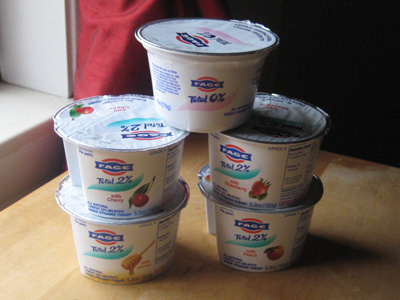 Disclosure: I was sent a case of 8 Fage Yogurt cups and compensated by BlogHer to review this product.

The last time I tried Fage Greek Yogurt, I was not impressed. To be specific, I said “it tasted like diaper rash cream.” Several months ago I was prodded to have it again, or more accurately I had 1/4 a bottle of agave nectar with a lil’ Fage mixed in. It was delicious! Because I love sugar like my own child! A child I would eat! Then I drank the rest of the agave nectar in two days and decided it was best not to do that too frequently.

Recently I was asked by BlogHer Ads to review all four flavors of Fage 2% as well as the plain Fage 0%. (The percents refer to the type of milk used to make the yogurt.) The packaging says Fage is pronounced Fa-yeh! (exclamation point theirs). I’m sure if anyone had peaked in my fridge, they would have exclaimed, “What the Fage is all that yogurt doing in your fridge?”

Fage Yogurt is a Greek style yogurt, which means it’s thicker. As their web site says, the yogurt is “100% natural” and “contains no sweeteners, thickeners, or preservatives.” Thankfully for people like me who frown on the “no sweeteners” policy, some Fage 2% cups come packaged with flavoring: Strawberry, Cherry, Peach, and Honey. The packaging reveals the first three have 130 calories, but the last one has 180 calories, so if you’re being calorie conscious you might want to skip the honey. The packaging for the flavor packs is rather clever. Once you peel off the foil lid, you can tip the sauce half of the cup 180 degrees to pour it on the yogurt. Since it had been in the fridge, I had to use my spoon to get all the chilly flavoring out, which was of similar consistency as fruit preserves. 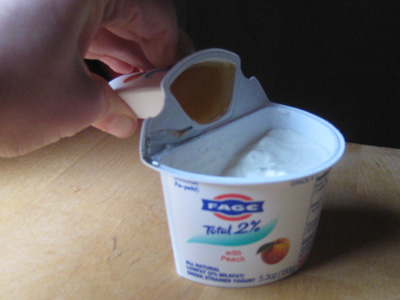 I mixed up the flavoring with the yogurt for all the packages and they were all quite delicious. The trick for me to enjoy Fage is to use the yogurt as a delivery device for the fruit or honey. Then I have a snack that’s sweet, thick, and creamy in texture. However, I didn’t mix my yogurt up all the way and was left with a bit of plain Fage at the bottom. Without flavoring the Fage yogurt is too sour and plain for my tastes. However, some people have suggested that those qualities make it a good substitution for sour cream in recipes. 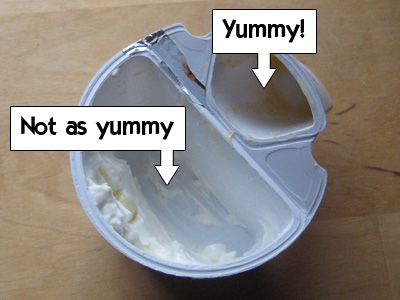 I thought it was interesting the flavored Fage comes in 2% and Total, but not 0%. I can only guess that they think if you’re cutting calories you don’t want the flavors. So, you’ll have to provide your own honey or agave nectar for that style. Which is a shame, because I can’t be trusted with a whole bottle of honey and I’d probably buy a 0% flavor pack if it were available. You can find out more about Fage Yogurt on their web site. You can win some free yogurt too. Visit the BlogHer yogurt sweepstakes page here.

Officer Krupke would give Fage a thumbs up if he had thumbs! 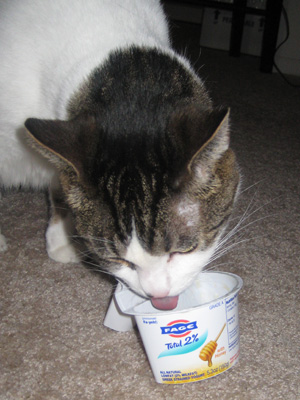 Later: Hard times are good for hard candy and porridge

Earlier: My timing is off