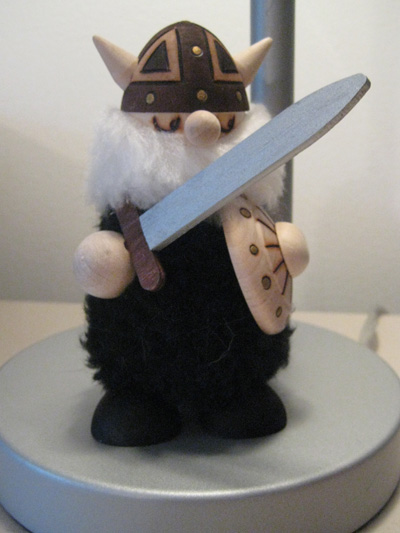 This lil’ Viking man stands guard over my computer from the platform of my desk lap. When I saw him in the Norwegian store in Colorado, I wanted to pick him up and put him in my pocket to ward off lint. When I tipped him over and looked at his feet, the number handwritten on a white price tag was more than I wanted to pay. So I put him back and traipsed off to fall on my ass on icy sidewalks.

As I took in the snowy sights of town, I kept thinking about the lil’ Viking man, so much so that I returned to the store later that day and splurged on him. I love his round little nose and his round little hands. He looks kinda dopey, like he didn’t mean to get into the Viking business, but that’s what his father did and his father’s father did, so he picked up the shield and sword and tries to stay in the back of the raids. I’m glad I spent the money on him. I only hope he survives the occasional attacks by roaming house cats.

Later: Hanging out at the Obamas’ new pad