PastaQueen reviews the new Long John Silvers Freshside Grille Menu while attempting not to use pirate talk, me mateys. Arrrgh, she screwed up already. 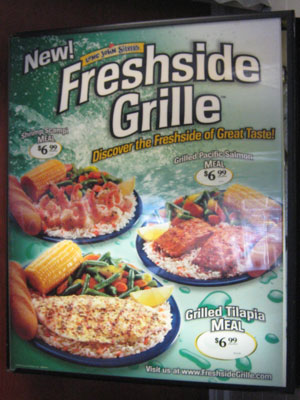 Disclosure: Long John Silver’s sent me $35 worth of “treasure checks” to use to sample their new Freshside Grille menu and write an unbiased review. I used $15 worth of the checks to sample their menu, I’m giving away the other $20 worth.

Shiver me timbers, but I had never eaten at a Long John Silver’s before this month. My family had a handful of fast food restaurants we patronized – McDonalds, Arby’s, Hardees, White Castle, and a place in Crawfordville called Rax that I thought went out of business ages ago, but Wikipedia says it’s still operating in some locations. I never stepped a boot inside a Wendy’s or a Burger King until high school when my friends invited me to these places or worked behind the counters there. This is particularly odd considering that LSJ is part of the Yum! food brands whose headquarters is in Louisville, Kentucky where I grew up.

I didn’t even know Long John Silver’s was a fast-food style restaurant. I thought it was a sit-down place like Reb Lobster or Joe’s Crab Shack, which are the only other seafood restaurant chains I’m familiar with. However, they sent me some “treasure checks” to sample their new Freshside Grille menu, so I wasn’t going to turn down free shrimp.

I could tell when I walked in that they were heavily promoting this new menu option because there was a huge lighted sign on the wall (which I posted above). I looked at the menu and saw that I had the choice of three main courses – Grilled Pacific Salmon, Grilled Tilapia, and Shrimp Scampi. Each meal also came with a vegetable medley (which sadly did not play music for me), seasoned rice, corn with butter oil (strange how it’s butter oil and not butter) and a breadstick. (You can’t go anywhere without getting a breadstick.) I ordered the tilapia meal which looked like this. 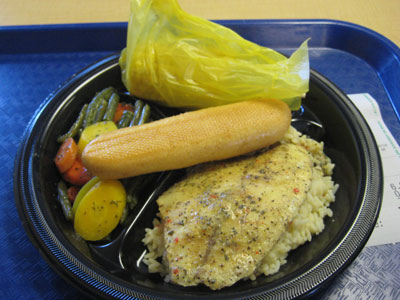 The cashiers saw me snapping photos of the menu and the food, which probably made me look like a secret shopper. Also known as mystery shoppers, these are people who take on assignments to order certain foods or ask certain questions of employees so companies can check up on their stores. I looked into doing it once, but didn’t think a free meal was worth all the trouble. The cashiers walked by a couple times to clean and get water, but if any of them asked about my camera I was prepared to tell them, “Don’t mind me, I’m just a blogger…Arrrrgh!” Public embarrassment over picture-taking is just a job hazard. 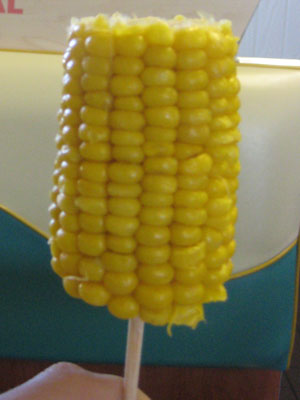 I unwrapped the item in the yellow plastic bag to behold, OMG, corn on a stick! This made eating the corn so much fun, almost like it was a corn-flavored ice cream treat instead of a vegetable I would probably see in my poo a day later. Eating food on a stick makes it much more fun. I want to eat all my food on a stick!

The meal was tasty and I’d definitely order it again. I entered the restaurant for lunch hungry, and left feeling surprisingly full. Then I looked at the little nutrition card I picked up at the register and figured out why I was so full. 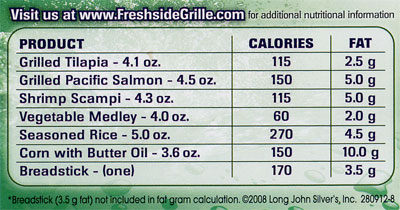 The entire meal comes to a total of 765 calories. Damn! I only ate half my rice, so I probably consumed 630 calories, but that can still be pretty hefty if you’re on a 1200 calorie diet (which I’m not because I would DIE, or at least stop menstruating). However, if you trash the breadstick it goes down to 595 calories and if you act like you’re at a wedding and toss the rice, it gets down to 325, a much more acceptable number. If you order this meal, you probably shouldn’t eat everything they give you, but the same can be said of most restaurants. Do the math and figure out what works for you. The salmon meal also has an additional 35 calories in the main entrée. They all cost $6.99, which came to $7.62 with the 7% sales tax in Indiana….or no it doesn’t. Huh, I think they should have charged me $7.48, but it’s not my money, so who cares? I don’t know why they charged me 9% tax, unless there’s some secret seafood tax I don’t know about.

The only question I have left is why do they spell it “grille” instead of “grill?” When you add the “e” it refers to the grille on a car or metal grilles on your teeth. You’re not going to get any copy editors eating at your restaurant with spelling like that.

On the way out of the restaurant there was a bell by the door with a sign that said I should ring it if the meal was good. I enjoyed the meal and fish is a good source of protein and omega-3 fatty acids, but I figured the cashiers were sick of hearing it rung day after day and was rather surprised they hadn’t ripped the ringer out of it already.

Now, if you’ve read this far, you can participate in my giveaway! I’ve got four $5.00 treasure checks left to give away. I’m going to give two people $10 worth of checks so they can try the meals. If you want one, comment on this entry by 11:59pm on Saturday, February 14th, 2009 using pirate talk. A winner will be drawn randomly. Get on it, me mateys!

Later: Ask a loser: How did that organic diet go?

Earlier: A child of adult divorce