I don’t know how our parents, or even our older siblings, got through the work day without the Internet. A funny YouTube video or a LOL Cat can lighten spirits weighed down by a heavy workload. Lately our Internet savior has been…the Nannerpus!

Nannerpus made his national debut during a Superbowl ad for Denny’s. He’s not even a month old and he already has a Twitter account, parody videos, and tribute art dedicated to him. He’s got a catchy theme song and whenever there is a lull at the office, or whenever there is not a lull at the office, someone will hit YouTube and their laptop speakers will scream, “It’s Nannerpus!” And then the song is caught in your head once more. 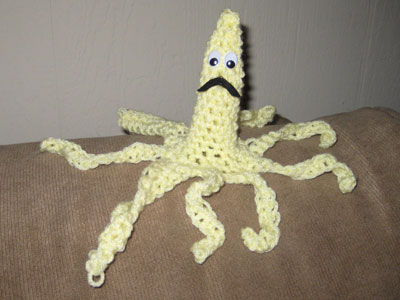 Yes, I now spend my evenings crocheting anthropomorphized banana creatures with googily eyes. This is why I end up writing all my blog entries at 7:00 in the morning. Needless to say, the Nannerpus was a big hit at the office, though I have now been thrown the challenge of making a Nannerpus hat. I do not know if I will accept said challenge or not. Either way, I think the answer to Denny’s question is clear. Is it time for a more serious breakfast? Absolutely not!

If you want to make your own Nannerpus or Nannerpi, I followed the idea behind this octopus pattern, though I freestyled it to my own tastes. I didn’t write down what I did, so you’ll just have to feel it out. The mustache was cut out of black felt and sewn onto the yarn with thread. The googly eyes were attached with tacky glue. Don’t forget to put some paper inside the octopus so you don’t get glue on the other side.