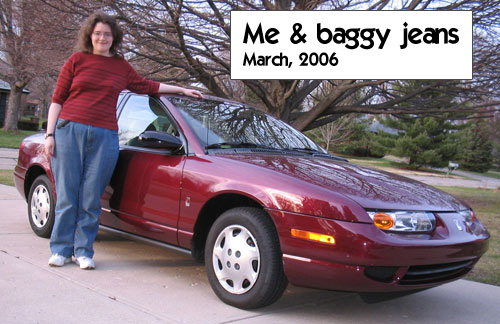 I make my final car payment this month, just in time to watch my vehicle’s manufacturer spin out of orbit. I’ve read a couple articles about what’s happening to Saturn, and I still don’t understand what’s going on. From what I have been able to decipher, GM will continue to make and sell Saturns until 2011, since that is how far in advance they have planned. After that… they will either sell the brand to someone else or use the network of dealerships to sell lots of different brands of cars under one roof? I think? Maybe? Yes? No?

It’s all rather sad, because I love my Saturn. Yes, it only has 4 cylinders. Yes, it barely made it up the Appalachian mountains. But it is fuel efficient and shiny and the back seats fold down and I have a CD player and a cassette deck (for my MP3 player’s car kit) and it carts me around town, which is all I really need. It gets the job done and it only cost about $8,000 and I paid for it all with my own money, so it is mine, mine, mine! Plus, it is a small car I would not have been able to fit into 4 years ago, so I’m proud that there is space between me and the wheel.

That’s why it was rather depressing to read this post on a car blog called Jalopnik about how much they thought Saturn sucked. Then Dana Danger told me that blog is targeted at the demographic crossover between video-gamers and car freaks, so they are mostly little boys who are mad they have to drive their moms’ Saturns. Then I felt better.

The odd thing is my last car was an Oldsmobile…which also went out of business. I buy classic cars before they become classics. Watch out dealerships! In another few years I’ll probably be buying a new car. Pray I don’t come to your lot.

Later: The falcons are back!

Earlier: In defense of quiet people