I had no idea who Feargal Sharkey was except that he had a funny name and he recorded a guilty pleasure of mine, A Good Heart. It is a very 80’s song with a video that features two, TWO, drummers, because one cute drummer is not enough when you are making a cheesy 80’s video. I never told anyone I listened to this song, just like I don’t tell them about the cheesy TV shows I sometimes watch. (Smallville, I’m looking at you.) 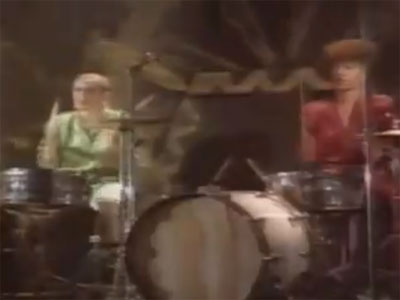 I was listening to Pandora the other day which is a free web service which plays songs that are similar to an artist or song you suggest. I entered “Maria McKee” and was listening to several folk/rock chicks when suddenly a cover of “A Good Heart” by Maria McKee came on.

“What a funny song to cover!” I thought as I looked up from the bills I was sorting. “I thought I was the only one who had ever heard this song.” So I searched for Maria McKee on Wikipedia, and what do you know, Maria McKee wrote “A Good Heart” at the age of 19. Feargal Sharkey recorded it and it went to #1 on the UK charts in 1985.

Suddenly, I was no longer embarrassed that I liked this cheesy 80’s song. I was proud I liked it despite itself. I didn’t have questionable taste after all, I simply liked a song by one of my favorite songwriters even when I didn’t know she had written it. It proved that I truly do like Maria McKee even when she’s all synth-ed up.

I also looked up Feargal Sharkey and while I didn’t find out what his momma was thinking when she named him, I learned he was the lead singer of The Undertones. They are known for the song Teenage Kicks, which has been covered by lots of people, so it must be rather popular. I bet there are those of you out there lamenting my ignorance and will undoubtedly berate me for now knowing this band’s important place in rock history. Sorry, y’all. I was born in 1980.

While a good heart might be hard to find, thanks to the Internet information isn’t.

Later: Ask a loser: What did you eat on the South Beach Diet?