I flew from Indianapolis to Chicago today, which is probably as good for my carbon footprint as driving two blocks to the grocery store. While I am grateful for the free plane trip that Quaker Oats provided so I could attend their Living Proof weekend, the practical part of me thinks I should have just taken the bus. When you add all the time it takes to ride the shuttle from long-term parking to the airport, get through security, and ride the train into the city, I doubt I saved any time.

However, I probably wouldn’t have met Rod, the homeless tour guide either. As I was walking on the cold, gloomy streets of Chicago, I ducked between two columns of a bank building to look at my map I’d hastily purchased at Borders on the way out of town. Rod asked if he could help me and then walked me 6 blocks to my hotel. I did not immediately “make” him as a homeless man. He was dressed in jeans, a blue jacket, and a hat. He was well-groomed, freshly shaved, and looked like any other Chicago citizen. He said the advertising company that he was the janitor at moved to Europe two months ago and he’s been living at the YMCA for $30 a night since then. I don’t know if any of that is true, but he seemed sincere enough. Of course, I am highly gullible and a tourist to boot, so he might have been spinning this tale for years before the current economic crisis made layoffs so widespread and his story more likely.

I didn’t feel threatened by him, nor did I feel overly pressured to pay him, but I decided to give him a $20 and I’m 95% sure that money will not go to a local neighborhood drug dealer. I probably would have only given him a $5 if I had one on me, alas I’d just gotten some $20’s from the ATM before leaving and I doubt Rod was going to make change.

Now I’m at the Hard Rock Hotel. I went to the bathroom as soon as I got in and I was halfway through a tinkle when I looked out the huge window in the shower on my right and realized any businessman in the building across Michigan Street could take a gander at my fleshy white thighs. I hastily pulled the shower curtain shut. Now I’ve made a cup of coffee and I’m settling in nicely, hoping the coffee I just brewed is as free as the Wi-Fi. 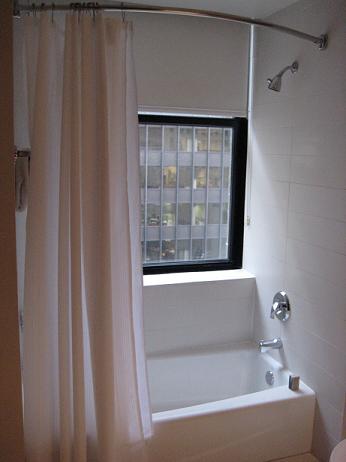