I don’t have cable, but if I did I would be watching “Ruby” on the Style Network. “Ruby” is a new documentary-style reality show that follows the charming and delightful southern belle Ruby Gettinger as she seeks to lose over 300 pounds. “Ruby” isn’t a game show like “The Biggest Loser.” She’s not competing against anyone, though she does have professional help from an obesity expert, a trainer, and a therapist. Ruby has to live in the real world and doesn’t get to move to a ranch where she exercises six hours a day. Instead she lives at home on disability with her nephew’s assistance. Ruby is an average Georgian girl with one serious problem she’s decided she must overcome or die trying. 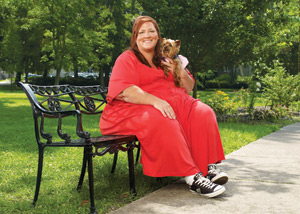 I may not have cable, but I did receive a screener of the second episode and was able to watch the complete first episode on the show’s web site here in the “Videos” section. (ETA: Looks like they have taken the episode down now. Sorry!) As I watched the show, I found myself muttering, “Oh, yeah,” as I remembered moments from my own period of morbid obesity I’d otherwise forgotten. Ruby has to hold onto the side rails of the treadmill for balance, like I did. She dislikes the chairs with arms at her friend’s house, just like I used to. She wants to take a bubble bath in the tub, a task I never felt worth the effort because I would struggle to get out of the tub. When she looks in the mirror sadly, I remembered all the times I sat in the Lane Bryant dressing room and wondered, “When did that become my reflection?” And while I never wore a mumus or put bricks under my bed to prevent it from collapsing like Ruby does, I did wish I could wear calf-high boots and jeans like she wants to.

Despite her extraordinary problem, Ruby is an ordinary girl. She’s the kind of person you’d have a blast with chatting in the salon, as we see her do in the opening of the second episode. The topic of discussion is an old boyfriend who is coming back to town after he broke her heart years ago because she could not lose weight for him. Amazingly, Ruby is not bitter over her ex and has come to accept that he was not the one for her. Even though she is unhappy with the state of her body, Ruby never exudes self-hate or negativity. Instead she expresses a love for life, a life that she does not want to be cut short by diabetes or sleep apnea.

I admire Ruby for letting cameras into the vulnerable parts of her life as she takes on this enormous task. In the second episode we see a group of people making fun of her size. She plays it off at the time, but later comes near tears as she recalls the moment in a private confessional. Luckily, Ruby is surrounded by friends and family who love and support her, though they too have to change their ways. Particularly ironic is one friend’s musing that it will be hard to do as she stirs a big pot of macaroni and cheese.

If “Ruby” suffers at all, it is from squeezing itself into the traditional trappings of a reality show. There is some repetition as clips from different interviews set up the scenario for this week’s show. The show also skips over some details, like why her nephew is living with her. He says it’s because his parents got a cat which he is allergic to, but I suspect there’s more to that story. The occasional voiceovers by Ruby which connect parts of the story sound somewhat awkward, but also go to show that Ruby is a real person and not a professional actress.

That is what I appreciate most about this show. The main character is a real person (who uses phrases like “I’m going to kick his astronaut” so she won’t have to curse) who also happens to be morbidly obese. People of that size are typically dehumanized and seen as objects to be ridiculed, but “Ruby” makes you see its heroine as a real person who could just as easily live next door as live in your TV set.

If you get the chance, I hope you check it out. “Ruby” airs on Sundays at 8pm EST on the Style Network. “Ruby” is a gem of a show.

Later: A better version of me