I usually eat oatmeal for breakfast in the mornings because I am sleepy and lazy at seven o’clock in the morning. It’s easier to dump a packet of oats in a bowl, add water and microwave it than to prepare an omelet or scrambled eggs. However, the protein in eggs is good for me and keeps me fuller longer, so I sometimes make peanut butter crepes on the weekends. They’re pretty quick too, though I have to clean more bowls, beaters and skillets later.

I grabbed this recipe from Erin Shea’s site, Lose the Buddha over a year ago, though she calls them peanut butter pancakes. I prefer to call them crepes since it sounds more egg-like. I’m sure someone will tell me why it’s absolutely erroneous for me to be calling them crepes, but I don’t care, they’ll always be crepes to me. I also doubled the recipe because I am tall and hungry.

1 Tablespoon Splenda (or sugar or another sweetener)

Combine ingredients in a blender or with a mixer in a bowl. Lightly coat a skillet with spray-on oil and heat on high. Pour half the mixture onto the skillet, swirling the pan around to coat the entire skillet in the egg mixture. Once the mixture is starting to thicken, flip it over and cook the other side. Remove from pan. Repeat for the rest of the mixture. Enjoy! 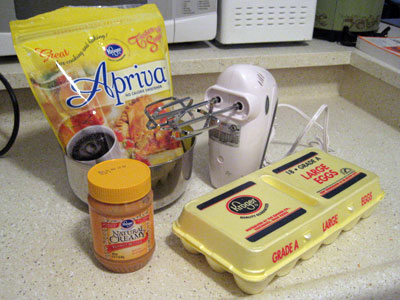 First, I separate the egg whites. Four years ago this seemed insanely difficult, but now I do it with ease. I used to feel bad about dropping the egg yolks down the garbage disposal, but I got over it, especially when I realized the egg whites have less calories and more protein than the yolks. Next I dump in the Splenda (or in this case, the generic Kroger brand with identical packaging, Apriva) and peanut butter and mix the whole concoction with my hand mixer. 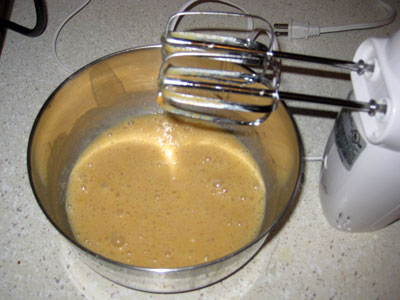 As I’m mixing, I’m also heating up the skillet which I’ve sprayed with oil. I pour half the mixture into the pan and let it cook a while. 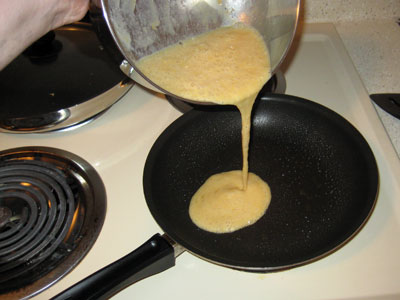 I swirl the pan around to cook more of the batter around the edges, then wait for it to firm up a bit. 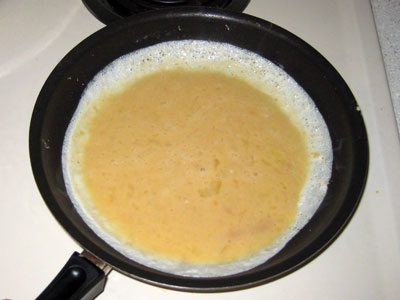 Next comes the tricky part. I have to flip the crepe, but it’s still pretty runny on top. Usually I end up splattering egg whites on the stove and folding the crepe strangely. As long as it all gets cooked, I don’t really care. Pretty is overrated. 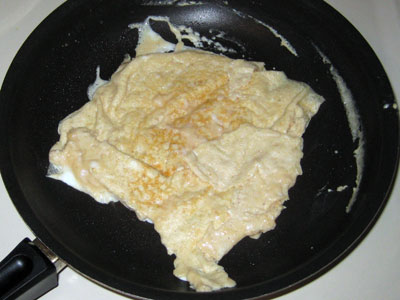 When that crepe’s done, I take it out of the skillet and cook another. Then I have a tasty, peanut buttery breakfast. The kitties agree! They always lick the plate clean with their tongues, which helps cut down on the dishes I have to do. 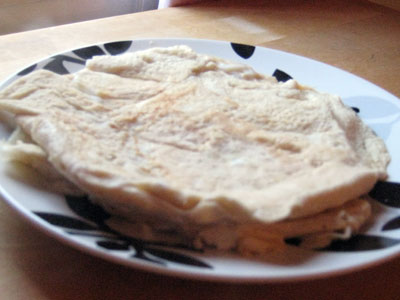 Later: I love a parade (not) – Riding the Cultural Trail