Ever since I met Stephanie O’Dea at the BlogHer conference, who blogs at A Year of Crockpotting, I’ve wanted to try a crockpot recipe. Only, I don’t own a crockpot, which made it a little hard. So I called up my mother, who is the warehouse supervisor for the miscellany of our lives, and behold, she conjured up a crockpot from the back storeroom (aka her 2-bedroom apartment)! 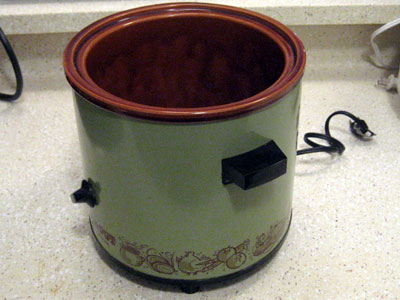 Note its olive green complexion, which was as popular in kitchen appliances in the 70’s as disco and wide lapels. This crockpot was a wedding gift that outlasted my parents’ marriage. I decided to test how well Rival built their slow-cookers with the Crockpot Applesauce Chicken from Stephanie’s site.

Put the frozen chicken pieces into your crockpot. Add the onion (if you are using the dried onion, wait and add it to the applesauce). In a bowl, mix the applesauce, vinegar, garlic, and spices together. Pour on top of the chicken.

I reached into the fridge to grab the onion I’d been storing in a Tupperware container, only to discover a grotesque, slimy concoction that was too horrible to photograph. Right, so no onions this time. I decided to halve the recipe, so I started by placing two chicken breast halves in the crockpot. Please note, this is also the fastest way to summon cats to a kitchen counter. 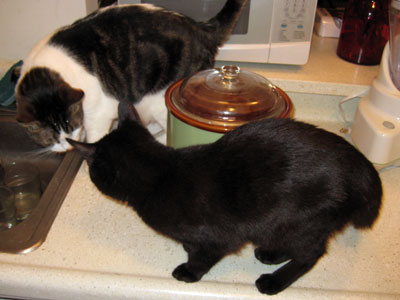 Chicken? Did somebody say chicken?

Then I mixed up the applesauce mixture in a bowl and poured it over the chicken. 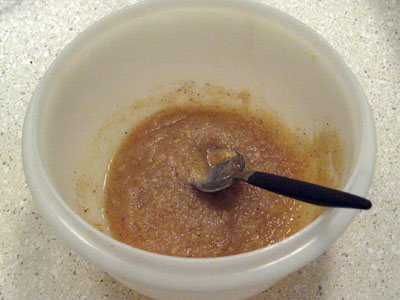 The next step is to turn the crockpot on. The dial on the front of the appliance had three settings: Off, Low and High. I plugged in the crockpot, flipped the dial to high and waited. I had no idea if the device was actually on. There was no light that lit up when I turned the knob and I couldn’t feel any heat coming from the pot. I purposely chose to do a test run of the crockpot while I was home so I didn’t accidently burn down the house while I was away, but that would be impossible if the thing wouldn’t heat up. I came back 10 minutes later and saw condensation forming under the lid and knew the crockpot was still working.

Three hours later I pulled this out: 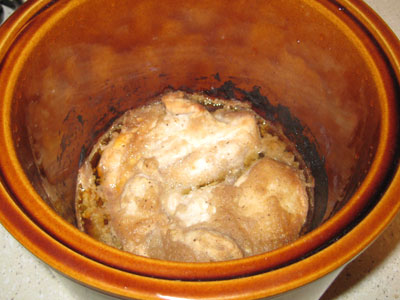 The applesauce chicken was pretty good and juicy. I’ll probably try some other crockpot recipes. Perhaps I’ll upgrade to a model that is younger than I am so I can schedule meals to be ready when I come home. That’s the real appeal of the device, because on most days I want to collapse in bed by the time I get home. I haven’t had the energy to cook something without instructions printed on cardboard for a long time. 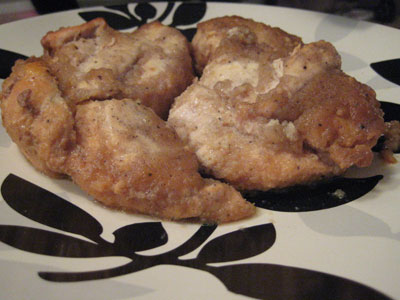 Later: Well, stick a needle in me. Or forty.