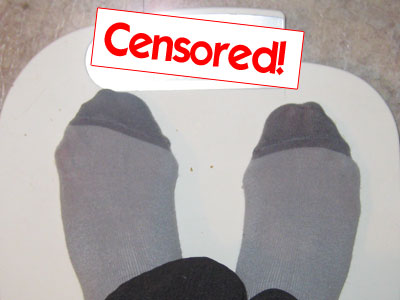 There is a box of clothes on my closet floor labeled, “Fat clothes (in case of emergency)” which is slightly less full than it was two weeks ago. Sound the sirens and alert the diet police because this is most definitely an emergency.

I stepped on the scale two weeks ago and a scary number appeared in the window, like a gremlin peering in. Aaah! It wasn’t so much a surprise as an inevitability, considering that I’d stopped exercising for three weeks are started eating whatever the hell I wanted. Oh, the cashiers at Kroger could tell some tales! Let it be known that I have discovered the secret to weight gain: eat more, move less.

I was sick of exercising. I was sick of eating salad. I was sick of seeing everyone eat donuts at meetings while I was eating carrot sticks. I resented how much time exercise took, leaving no time to work on my blog redesign. And most of all I was bored. Bored with Pilates. Bored with running. Bored with lifting weights. Bored, bored, bored. I’d done it all before and it had lost its mystery, just like my new kitten is fascinated every time I flush the toilet, but my seven-year-old cat is so over the wonders of indoor plumbing that he can’t be bothered to roll his eyes in boredom. All I could think was, “Running? Again? Seriously?”

I saw the weight slowly creeping up on the scale and in the fit of my clothes, but I didn’t say anything on the blog because then I would be expected to do something about it, which would have greatly interfered with my plan to eat a pint of ice cream in the Fresh Market parking lot after a stressful day at work. I still didn’t care all that much, even though my pants were one size larger and my face was a little rounder.

Then my pants got really tight and I had to move up two sizes larger than my skinniest size. I stepped on the scale and saw scarier and scarier numbers. Then I was lying in bed and heard my heartbeat as I rested my ear against the pillow. I counted and noticed that it was beating over 60 beats per minute. This above all things pissed me off, more than the pants and more than the scale. My resting heart rate had previously been a rather freakish 40-45 beats per minutes, which is very low and typical only in athletes. When I would visit the doctor’s office, the nurses always commented on my low pulse. It made me proud because it was proof that I was in shape. I was an athlete. But now my heart was beating faster, which meant it wasn’t quite as strong because I hadn’t been exercising it.

And suddenly all that apathy I’d been swimming in got sucked out with the tide and I started to care again. A LOT. Because while I expect my weight to fluctuate slightly up and down for the rest of my life, ultimately there has to be a line. This is the line. I promised not to buy new pants, and I’ve stuck to that promise, though via a loophole since I’m wearing old, larger pants instead of buying new ones. I can’t get any fatter. It’s rather amazing how quickly I gained back weight. It happened at a rate of over a pound a week, as if I was an actress preparing to play Bridget Jones. I didn’t even do it on purpose.

For the past two weeks I’ve been getting my ass back in gear again, working on ways to lose this weight I’ve gained. I’m not going to say how much because I’m sick of weighing in each month. I will say it’s between 10-20 pounds and I am going to mention that it happened. I’ve always thought it was bullshit when people stopped blogging when they gained weight. It happens to everyone. It’s why weight maintenance is so hard. There’s no sense in not talking about it. I’m not ashamed that I like to eat donuts. Granted, I tend to wait until I’m back on the straight and narrow before I mention any gains, but oh well, I ain’t perfect. That’s why this is a blog and not a 24/7 objective window into my life.

I’ll talk about everything I’ve been doing to lose weight again in my next entry. But now I should go shower because I’m all sweaty from running.

Earlier: Just do it