When I was overweight, I never understood skinny girls who looked at photos and complained, “I look so fat in that photo!” I always looked fat in photos because I was fat. The skinny girls looked skinny. Perhaps the camera didn’t catch them at the best angle, but they looked thinner than I ever would.

Then I lost about 200 pounds and I totally understand where they were coming from. I present exhibits A, B, and C. 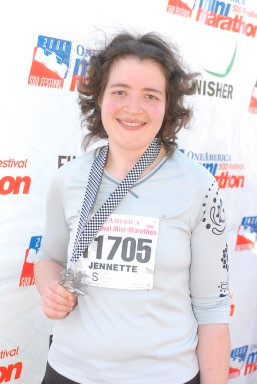 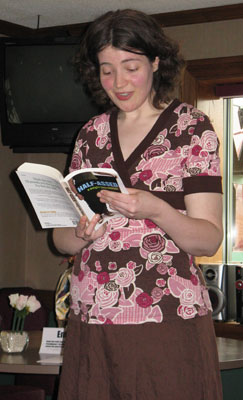 These three photos were all taken on the same day, which is odd because it looks like I gained 10 pounds and then lost it again before noon. I ran a half-marathon that day, but running 13.1 miles does NOT burn 35,000 calories, nor could the lasagna I had for lunch make me that much fatter.

In the first photo, I’m striking the “skinny pose.” I have one foot placed in front of the other. I’m turning at the waist, but rotating my shoulders towards the camera. I’m jutting my chin out slightly. I read how to do this online and at first I felt silly and awkward arranging my limbs and torso like this, but then I noticed it actually works so I do it often. If you watch starlets on the red carpet, they use these tricks too. I’m also wearing a dark color on the bottom and a light color on the top to balance my bottom-heavy pear shape. All in all, I look pretty thin.

About 2 minutes earlier, the second photo was taken right after I finished my race. I eagerly downloaded it from the official race site online and was crestfallen when I saw it and immediately thought, “I look so fat in that photo!” I don’t know if it’s the angle or the lighting or post-race bloat that evaporated 120 seconds later, but I think I look fat in that photo. Which sucks, because it’s supposed to be my proud, victory photo and I don’t feel particularly victorious when looking at it.

Then, there is photo number 3, taken a couple hours later at my book release party. My face looks the thinnest in this photo to me and I’m rather satisfied with my size. Maybe the dark lighting helps? :) I’m sure some of you will comment that I look great in all these photos (or that I look like a bean bag chair if you’re a hater), but it doesn’t really matter what you think, it’s what I think.

It seems odd that all these photos were taken within hours of each other and yet I look so different in all of them. I know my face and my body better than anyone else, so I’m probably the most critical of my appearance, noticing the smallest variations. It’s amazing how different I can appear, not because of my size, but because of the way my body is turned or whether I’m wearing makeup or whether someone turned on the overhead light.

I might not be the best judge though. There are times when I don’t think I look particularly good or bad in a photo and other people compliment me on it. For instance, I got several compliments on my Jamba Juice photo, but when I saw it I thought it was far too dark and that I looked a little bit irked. I would caption this photo with a thought bubble saying, “Have you taken the photo yet? I want to pick up my orange dream machine!” 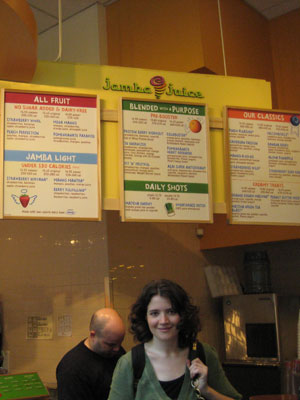 The worst was when I was still morbidly obese and I’d look at a photo in horror and someone would say, “What a great picture! It looks just like you!” Geez, really? That’s awful. Not only would I feel bad about an ugly photo, I would feel bad that I evidently looked like an ugly photo all the time.

Photos confound me. I like living in a technologically advanced society, but if I’d been born in the 1700’s without running water or electricity, at least I wouldn’t have to deal with the head game that digital imagery now provides on a daily basis. Am I fat? Am I thin? Who knows?

Somewhere all those skinny girls I never understood are laughing.

Later: I love what you’ve done with your HTML!

Earlier: Wednesday wondering: Do you pay attention to what other people eat?