The one-way street in front of the parking garage did not head the one way I wanted to go, so I had to loop around New York Street to try again, when suddenly I found myself in the middle of a triathlon. I always run into unexpected events downtown. 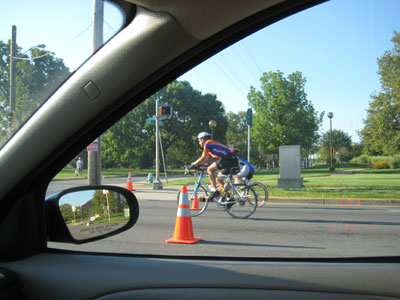 As I sped alongside the bikers, I had an urge to speed up and try to beat them, as if I was competing. However, the increased police presence kept my speedometer safely under the speed limit.

I yelled, “Yeah! Go!” to the competitors, even though they couldn’t hear me from inside my air-conditioned car. Ever since I participated in the Indy 500 Mini-Marathon, I have a lot of respect for people who train and compete in long-distance events. I’ve been rolling around the idea of competing in a triathlon myself, however I don’t know how to swim and I don’t own a working bike, so I would only be able to run. Then I wouldn’t so much be competing in a triathlon as a monathlon. We could hold a monathlon on the Monon Trail here in town! The Monon monathlon. Yeah, I should get right on organizing that.

As I was driving with the bikers, I cooked up another sporting event idea – The Lazy Person’s Triathlon. We would start by taking a jet ski across the water, hop on a motorcycle to complete the biking portion, and finish up the running segment on Segways. No carbo-loading required! Just be sure to fill up on gas first.