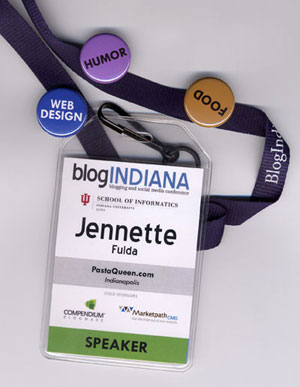 As I was standing in the hallway at the Blog Indiana conference last week waiting for a session to end, two men were chatting next to me about burning down the place where I work.

The other man got out his business card and said, “I agree. I’d love to take them down.” He handed his card over.

“I’ll help you go down there and torch the place some night,” the first man replied.

Wow, I thought as I stared through the glass door willing the session to end. I’d better not mention where I work. And next time I’m at the office I’d better take careful note of the fire exits.

Despite this flaming start, I enjoyed hanging with Hoosier bloggers last weekend. I wasn’t sure what to expect from a first-time blogging conference where the main focus was our location. Indiana is known more for its corn than its blogs and physical location seems irrelevant when it comes to the web. Many people blog because they can’t find people to connect with locally. The Internet is about globalization and the ability to meet friends who don’t necessarily know to avoid the 86th street bridge construction project or that Shapiro’s Deli has a great corned beef sandwich.

But, unbeknownst to me, Indiana has a local blogging scene. When I attended a panel led by Feed Me/Drink Me blogger Renee Wilmeth, she said hi to a local blogger that she seemed to know. In the hallways and at the cocktail party that evening, other bloggers seemed to know each other too. Which is when I started looking around and thinking, “Have there been local blogging parties that I haven’t been invited to? Am I supposed to know who these people are? ” I have been so focused on my global communities of women bloggers and health and fitness bloggers that I never noticed there were people down the street typing entries into Movable Type and WordPress too. It made me realize there is a niche for local blogging and I’m going to try to be more active in this community.

Now that I’ve attended two BlogHer conferences and a Blog Indiana, I’m starting to learn how to work these gigs. For instance, the next time I go to a conference, I should consider bringing candy. Then I won’t have to think up conversation starters or approach strangers, I’ll just spread mints on the table and people will flock to me. That’s what the lady from the Indianapolis Museum of Art did, which is how I found out there is an Indianapolis Museum of Art blog. They have a rather well designed site too, with lots of interactive features that I’m going to have to explore further when time stretches out like taffy and I have all the free time I desire.

It’s also good to remember that you never know what someone’s background is when you start talking to them. Just like the guys in the hallway didn’t know I work for the evil empire when they were plotting to destroy the Death Star, I did not know that Ray Pawulich used to work for the local alternative newspaper Nuvo when I started dissing their web site. Oops! (I’m still pissed that I never get notifications when I win free movie tickets on that site, so they deserve the bashing.) Ray doesn’t work there anymore, and instead is running Wake Up Naptown. (It’s called Naptown because we’re in India-NAP-oplis. This had to be explained to me because I am dense.)

A good way to get new readers is to become a conference “star.” You can be a star by doing things that make people pay attention to you. For instance, there was a Twitter board in the main hall. This was a screen that displayed any tweets on Twitter with the phrase “Blog Indiana.” Much fun was had with the board, but there were at least 3-4 people I never met, but am now aware of just because they tweeted a lot. Another good way to get noticed is to ask questions in panels. People will remember you if you say something smart or interesting.

I also found myself talking to some nice guys after the blog monetization panel, only to discover they were Republicans. Oh, noes! And one of them, Josh Gillespie, is so Republican he has a whole website about local Republican politics called Hoosier Access. I would never have gone out of my way to meet a conservative blogger, but I had a nice chat with him, he didn’t sprout demon horns or cloven hooves, and I helped him with his BlogAds. That’s one of the nice things about these conferences, you meet people you would never have met otherwise and they turn out not to be the devil.

Other delightful people I met included:

I also led a session on the morning of the second day called, “How to reach bloggers (Without pissing them off)” which was an excuse to show all the really bad press releases and pitches I’ve gotten from public relations companies over the years. I got some great tweets after the presentation. Nichole from The Lonely Lesbian said I was freakin’ awesome and that they should hire me again. Lesbians love me! I enjoyed talking about something not related to weight, and even a PR guy from Endelman, Phil Gomes and his wife Leticia (I hope I spelled that right) liked the presentation. I just hope no one thought I was complaining about being popular enough to attract all this mail. While most of the stuff I’m sent is poorly targeted and composed, like the Fantasy Football pitch I received yesterday, I am grateful that my blog is successful enough to warrant the attention.

It was also nice to be reminded that I know so much about blogging. The people at my full-time job are so amazingly good at what they do that I sometimes feel functionally retarded in comparison to their skills. But, I know so much more about blogging, social media, and design than most people, which reminded me that I am not as stupid as I feel sometimes.

One negative thing about the conference was that a couple presenters started shilling for the companies they work for. I don’t come to sessions for infomercials. If someone is interested enough in your product, they’ll track you down. Soft sells work better than hard sells. The other criticism I had is that there should have been a newbie track and an advanced track. Some people were beginners and would ask, “What’s WordPress?” while other people would ask, “What web 2.0 social media tools are best for improving my pageviews and SEO?” Of course, it will probably take a few years to work out all the kinks. You can never anticipate all potential problems in advance.

All the attendees had an interest in blogging, but that in itself is such a wide interest that it attracted an odd mix of people. As one attendee, Tom Britt said in a post:

…blogging is just a technology that is used and adapted by many people in many different ways. We might as well had a hammer convention and had Lowe’s, Home Depot, and Sears sponsor it.

“I use my hammer to knock down walls.”

“I paint winter scenes on hammer handles and sell them at craft fairs.”

“I’m going to the 2012 Olympics to participate in the hammer throw competition.”

“I use hammers to correct my kids.”

True, that. However, I liked meeting people from so many different backgrounds who were using blogging in different ways. But I think there must be a way to better focus them so everyone gets more out of the conference.

Overall I thought the event was awesome. I didn’t know what to expect, but the whole thing ran amazingly smoothly, especially for a first-time conference. Thank you to, Noah Coffey and Shawn Plew for taking on all the stress of putting this thing together. I nearly had a breakdown planning a simple book release party. Planning a blog conference would make my brain splatter on my monitor.

Earlier: Defensive blogging – I’m not clairvoyant but I try to be