I’d never parked on the roof of a grocery store before. I’d never been to a grocery store that had parking on the roof before. Now that the Fresh Market has come to town, I can check that off the list, because that was right up there with “pet a monkey” on the list of things I absolutely must do before I die.

I had to park on the roof because every single resident of Indianapolis was as stupidly excited about the opening of this grocery store as I was. Yay! I’m not the only food dork! I’ve been driving by the construction site every day on the way home from work, hoping for the day when I can easily stop off to buy overpriced sushi instead of detouring several miles out of my way to buy overpriced sushi. When they changed the banner from “Coming soon” to “Coming June 25,” I nearly started bouncing up and down in my car. I know they’re going to charge me far too much for mangoes, but I just love it when a new store opens. It’s like a big party and the whole town is invited! This opening is particularly exciting because no grocery store had been in that location since the Atlas grocery closed down in 2002 , which pissed a lot of people off.

Even with the deluge of customers, someone had taken the time to tip the top plastic hand basket up and away so it could be easily picked out of the stack. Nice attention to detail, guys! I wasn’t a few steps into the fruit section when a woman offered me a pineapple chunk stabbed not by a toothpick, but by a pretzel stick. I wanted to take a photo of the delightful hors d’oeuvres, but I was afraid of being accused of spying for the Kroger. I didn’t want to be tossed onto the freshly paved parking lot before I could check the price on sushi, so I kept my digital camera hidden in my basket with the flash off, which probably made me look even more like a spy.

When I walked in, I thought the prices were what would deter me from stopping here too often. However, now I know it will be the evil under glass. 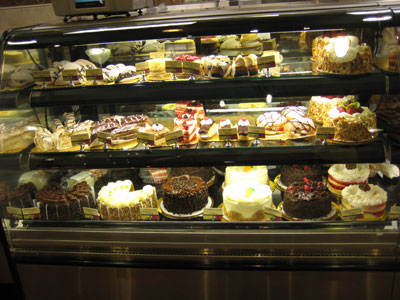 Along with the beautiful and tempting dessert section, they also had a huge candy aisle near the checkout section, which could not be avoided unless you plan on shoplifting. There is also a huge nut section, which made me nuts. I found myself staring at a big tub of Kona Coffee Crunch for an inordinately long time, reading the list of ingredients including cinnamon and walnuts and yogurt covered nuts, beginning to talk myself into buying some. I, who still have muesli in my trunk because I can’t handle having it in my cupboards. It was like having demons whispering to me. Finally I pulled myself out of it, if only because I took a look at the lines. 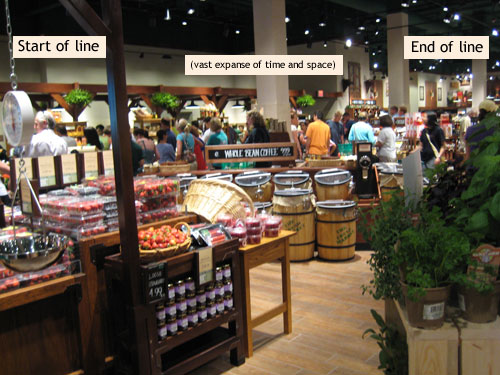 Then I ditched my plastic bag of $0.99 per pound peaches too, vowing to come back later in the week when prices were still good, even if those particular peaches won’t be.

Later: I want to set some cheese on fire!

Earlier: Another reminder – Reading with Robin