Last week I was too tired to slice a zucchini, so I just dipped the whole thing in hummus and chowed down. This is when I realized I’ve gotten really lazy about food preparation. 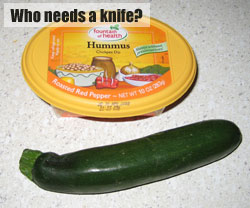 When I get busy, cooking is one of the first things that gets thrown aside. Sadly, flossing is usually next, which is why I’m crossing my fingers before my next dentist’s appointment. Recently I’ve been depending more on pre-packaged meals and the sushi at my Wild Oats Market. That’s why I freaked out last weekend when I pulled into the Wild Oats parking lot and the sign over their building was missing. Dear God, I just lost The Sunflower Market. I’d barely started sowing my Wild Oats. Was I going to have to start my own garden to get some whole foods? Thankfully, they were just changing their signage because they were bought by Whole Foods. The receipts have had the Whole Foods logo on them for weeks and now the outside is just catching up.

However, I should really start cooking dinner again instead of just heating it up in the microwave. Last weekend I spent two hours preparing vegetables, which sounds like it should be really boring and mundane, but was actually calming in a meditative way. Spring has finally arrived in Indiana, so I opened up my windows, letting in the sunshine and a cool breeze as I puttered around my kitchen. I got a low hum of satisfaction from making my meals and doing simple work for myself and not stressing out trying to get a million things done like I’ve been prone to do in the past month.

The sad thing is, the zucchini and hummus tasted just fine, so I’m probably going to do it again. Thus begins my reputation as a zucchini-munching cat lady.

Earlier: Lick the Produce: Scraping the bottom of the barrel