I may not have cable, but I have Buddhist style dumpling bao. 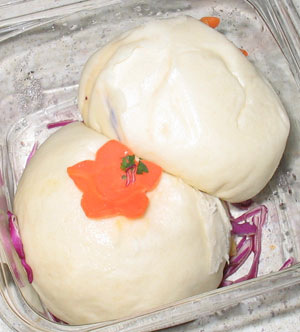 (Or I had it before it entered the acidic wasteland known as my stomach.)

I have no idea what dumpling bao is or what makes this one Buddhist style. (There was no meat in it, so if it believes in reincarnation, I can’t be accused of cannibalism.) When they cut a carrot wedge into a star and placed it on top, they had me sold. And pay I did. I’ve kept a budget of my spending habits for over the past year. In 2007 I spent an average of $360 a month at the grocery store. For a single woman in the Midwest, that’s probably a high number. I don’t eat out much, so that represents the majority of my food bill for the year and averages to $11.80 a day. Somebody’s got to pay for a trucker to drive my plums in from Florida, because tropical fruits aren’t going to grow in an Indiana snow storm.

Eating well can be expensive. Last week I was too exhausted between my headache and work schedule to cook anything in the evenings. Instead, I drove to the whole foods store and bought whatever looked good, like sushi or wraps or dumpling bao. It wasn’t cheap, but I figure my health is worth it. I have to budget my life accordingly, so I cut out things that I don’t really need, like cable. And I’m waiting for my TV to completely break before I buy a new one, even if it turns itself back on three times after I turn it off. In return, I get to eat food that is stuffed with carrots, tofu, daikon, shitake mushroom, edamame, green onion, corn, long grain rice, red bell pepper, green cabbage, soy sauce and sesame oil.

I was watching PBS the other weekend (mostly because I have 10 channels to choose from and this one wasn’t playing sports), and I watched a seminar by Suze Orman. If you haven’t heard of her, Suze Orman is an author, TV show host, motivational speaker and kind of scary (but in a good way). She’s fierce. And she’s all about empowering women to learn about money, but in doing so she also empowers them to take control of their lives. As I was watching her seminar, it occurred to me that money, weight, and happiness all bleed together. If one of those things is severely out of whack in your life it can affect everything else. A lot of the techniques she talked about for becoming wealthier and managing your money were really just good tips for becoming happier and managing your life. Money means freedom. As Orman said, many women stay in bad relationships because they don’t have the money to support themselves outside of them. Similarly, it really helps to have money to get yourself out of an unhealthy lifestyle.

A pair of running shoes: $100. YMCA membership: $48 a month. Pilates DVD: $20. A healthy lifestyle? Pretty freakin’ expensive. (And, oh yeah, priceless, though I’ve got some receipts that say otherwise.) Weight loss and weight maintenance isn’t cheap. Sure, I could run outside instead of in a warm gym on a treadmill. And there are probably ways to slash my grocery bill and still keep calories down, but it’s easier to spend the money. I’m glad I have a middle-class income and I can afford to spend it on these things, just like I’m glad I have health insurance that will pay for doctor’s visits if I get sick.

So there you go. Weight-loss secret #1: Have a decent income. Or start a farm. The manual labor will meet your cardio and strength-training requirements for the week and you’ll have plenty of zucchini.