My older brother sent me a link to this comic, which given my adventures in the produce section seemed relevant: 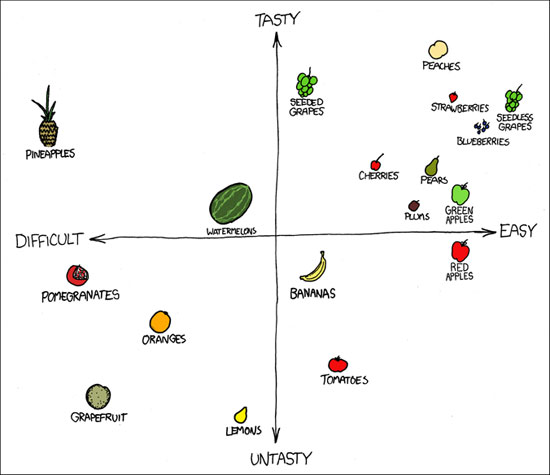 The comic is from http://xkcd.com/ who has a cool license on sharing and hotlinking, so I’m not even thieving his work (which kind of takes the fun out of it, doesn’t it?).

Personally, I would move the orange higher up on the tastiness scale, and bananas are definitely tastier than green apples, which should be moved below the tasty-axis. They’re just too tart for my tastebuds. I would also move pears above blueberries. I love blueberries in smoothies or in pancakes or oatmeal, but on their own I prefer the sweetness of pears. While grapefruits can be difficult, if you have the right utensils, they become easier to manage, so I would add a picture of a grapefruit plus a grapefruit spoon higher up on the easy-axis. Coconuts didn’t even make the graph because according to the mouseover text “Coconuts are so far down to the left they couldn’t be fit on the chart. Ever spent half an hour trying to open a coconut with a rock? Fuck coconuts.” (He cursed, not me. Fucking potty mouths.)

If I had any artistic skill, I would sketch in all the fruits I’ve tried recently. Oh wait, I do have some artistic skill. (Sometimes I forget.) I guess I won’t do it because I’m lazy.