I have joked that I used to spend all day on the couch, but that was an exaggeration. I actually split the time between my couch and my computer chair and I occasionally got up to go the fridge. But Sunday I literally did lay on the couch all day next to Mr. Food Poisoning and a 4 gallon blue bucket and you know what? Sitting in one place all day makes you really sore. My body ached more at the end of the day than it ever has after weight-lifting. Of course, that might have been related to me slipping on black ice outside the laundry room on Saturday because I didn’t know I needed to wear Yaktrax to wash my panties. I spent all Sunday crammed up on a loveseat slightly too small for my full length, watching Kiki’s Delivery Service

twice because if I got up to change the DVD, my brain would start sending the message “Barf! Barf!” to my stomach. The only redeeming element of the day came at 9:00pm on NBC.

I’ve been looking forward to the excessive use of spandex on this show since September. For those of you unfamiliar with syndicated television shows broadcast on the USA network in the 90’s, American Gladiators was a show that featured two male and two female competitors who would face off against the gladiators in several trials of strength, agility and balance. The remake is cheesy, good fun and it’s co-hosted by Laila Ali, a veteran of my other favorite, cheesy show featuring spandex, Dancing with the Stars.

While the gladiators have impressive physiques, it’s the competitors who are amazing. First, there was, Venus Ramos, a 5’4″ rehab physician and reigning Miss Fitness America who was called in as an alternate for Jesse Foster who hurt her knee after the first event and then had to go back to her job as a toilet paper salesmen. Venus inherited Jesse’s score, so she started out 4 points down, matched up against 5’10” Koya Webb. I did not have Venus envy. Yet somehow she was able to make up the difference and come in 2 points ahead before the final obstacle course – The Eliminator – named such because it will make you shit your pants. Contestants have to swim under a lake of fire. A lake of fire, people! 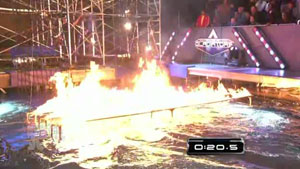 This course is so exhausting that every contest who managed to get to the end of the Eliminator was practically hyperventilating and could barely stand for the post-race interview. 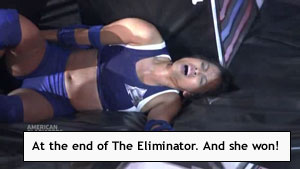 Koya was ahead for most of the course, but kept slipping and falling on the Travelator (yeah, they’re just making up words now). Venus rallied and passed Koya, winning the event and this round of competition! It was amazing. I’d completely written the tiny, doctor off, but she pulled it off. Venus is officially my hero of the week.

My runner up for hero of the week is Bonnie Blanco, a retired marine who rocked the Hang Tough event in which contestants have to swing cross a pool of water on rings hanging from the ceiling. Oh, and they have to avoid a crazy gladiator like Wolf who hasn’t showered for a month and howls for the audience before each round. I was the girl who would grab onto the first rung of the monkey bars and dangle for three seconds before dropping to the ground and twisting my ankle. I admire anyone who can just cross this course. Bonnie got about halfway across when Fury wrapper her legs around her in a death grip and flipped down into the “suicide squeeze.” 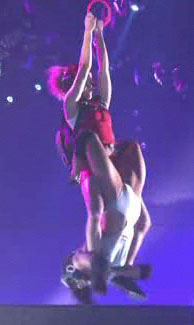 But Bonnie was not deterred! She clung onto that ring, for about 20 seconds while a 148-pound gladiator clung to her waist and tried pulling her down. Fury had to flip back up and fight with Bonnie – who tossed her off into the water below! Bonnie didn’t manage to get all the way across before the time ran out, but the only thing stronger than her tenacity is her upper body strength.

While I really enjoyed seeing athletic women rocking it on prime time television, I am concerned about the contestants’ safety. There were a lot of injuries. Jesse hurt her knee during the first round of Power Ball, a gladiator hurt his arm during Hang Tough, and Bonnie whacked her head on a metal pole during The Eliminator and was bleeding from the forehead for the rest of the event. It seems like a lot to go through for only a $100,000 prize. C’mon, NBC! They’re swimming under a lake of fire! That’s worth at least a million bucks.

There are only eight episodes in this season, three of them airing this week, but I’ll be tuning in to hear the contestants’ inspirational stories and to admire Crush’s lace-up, jersey corset and to watch Hellga, who actually admits to weighing over 200 pounds and can totally kick your ass if you have a problem with that.