I thought my scale might be stuck this month because I kept weighing in at exactly 176.6 for seven days. Usually the scale messes with me by modulating up and down erratically. Obviously it knows I’m on to it and has decided to mess with me by being eerily consistent. I was at around 177 this morning, which is down about three pounds since last month. Geez, this calorie counting thing seems to be working. Who’d have thought? Besides anyone who’s ever dieted. Ever. Except for me.

I took it easy on my Achilles tendon for three weeks after I injured it by running five miles on Sundays like a crazy person. I used the elliptical machine in my apartment’s hot, sweaty, fitness room instead and felt really weird spending 22 minutes operating a machine that essentially does nothing. They should at least hook it up to a turbine so I can power the air conditioner while I ellipticize. I suppose I should get used to it though since winter is coming and even if I wanted to exercise outdoors in the cold it will be too dark before and after work to do that. I am back to running now, doing easy two-mile runs every other day. Heh! I just used the words “easy” and “two-mile runs” in a sentence together. When did I become the kind of person who could do that and actually mean it?

I tried a yoga class in my office building during lunch. It was…interesting. I didn’t hate it, but I don’t think it’s my thing. It did make me much more aware of how I carry my body. For the rest of the day I was like a puppet master yanking my own strings, reminding myself to sit up straight. The human body has a lot of muscles and I think 90% of my are set to slouch.

) for seven months now. That’s bad of me. Your muscles get used to the routine and are not challenged like they are when you switch your routine frequently. I may exercise six days a week, but I am still a lazy person at heart and I didn’t want to learn a new routine. However, I discovered I can do half-assed push-ups now! Sure, I’m using my knees and I only go halfway down, but it beats my old technique of reenacting that bridge collapse in Minnesota. I also learned that if you haven’t been doing any lower body workouts DO NOT immediately attempt 24 lunges and squats. Or you can if you own a walking cane and don’t live on the second floor. I’ve been shuffling around like an 80-year-old woman because I can barely walk up and down the stairs. My quadriceps are shredded like mozzarella cheese.

I’ve also been experimenting with cheat meals this month. I decided my Hallmark visit was one big cheat day full of cookies and lemon squares and M&Ms. Strangely, I was so distracted by everything I did that day that I hardly thought about food at all even though my eating was on a different schedule. It was nice not thinking about meal planning since I think about it so much the rest of the time.

Then I followed it up with a Dairy Queen Oreo Blizzard cake on my birthday last Saturday. 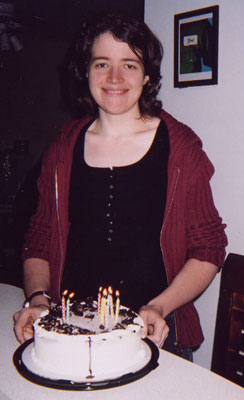 I ate half this cake. In less than 24 hours. And I don’t regret it. But it was strange falling asleep at 10:00 after the sugar crash.

The odd thing about being at a weight in between my goal (160) and a weight where I feel comfortable (180) is that when I’m given the choice between losing a pound this week or eating half a Dairy Queen Oreo Blizzard cake, some times I’m going to go with the Dairy Queen Oreo Blizzard cake. I have absolutely no guilt about it at all, which in many ways is far more fabulous than how unbelievably delicious that blend of soft serve vanilla ice cream, crisp chocolate wafers, and creamy white filling tasted. Oh, who am I kidding? Nothing is more fabulous than an Oreo Blizzard cake. I recently wrote that even if ice cream didn’t make you fat I’d still eat healthy most of the time. I now think that’s total bullshit because if I could get away with eating this all the time, I totally would. OhMyGodItWasSoGoodAndI’dTotallyDoItAgain!

Looking at that birthday photo and at the photos from my Hallmark trip, I am still amazed at how thin I look. And eating half an ice cream cake did not make 196 pounds instantly reappear. 196 ice cream cakes would though, so now I’m going to figure out how to cook this pumpkin I bought. If I get to use my scary, big, slasher knife it should be more fun than trick-or-treating.