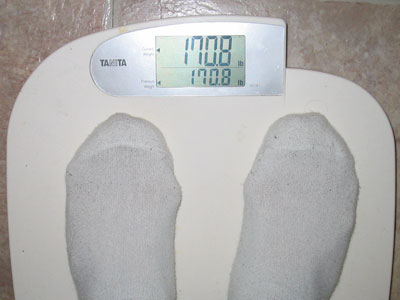 NyQuil: The ultimate weight-loss drug. Who knew? Back in January of 2005 I started out weighing 372 pounds, so now I’ve officially lost over 200 pounds. I suspect some of that will come back though when I stop eating chicken broth and Jell-O. Seriously, losing 6.6 pounds in two days? Unlikely.

I always imagined this day as some sort of big celebration, but I feel like I won the Olympic medal while on steroids. Yeah, I’ve lost over 200 pounds, but the final credit goes to whatever bacteria or virus has infected my nasal passages for the past three days. Still, woo-hoo! My jeans do feel a little looser and I can sit in those Michael Kors pants I bought at the thrift store even though they were a little bit too small.

The second 100 pounds were definitely harder than the first 100 pounds. It only took me seven and a half months to ditch the first century whereas the second one took another two years and two months. Whenever people hear about how much weight I’ve lost, they sometimes mention that they can’t get rid of the last 10 or 15 pounds they’ve been trying to lose. I completely sympathize. They are by far the hardest and don’t let anyone else tell you differently.

Later: Do not refrigerate