Once a month I try new fruits and vegetables. Sometimes I even know their names. 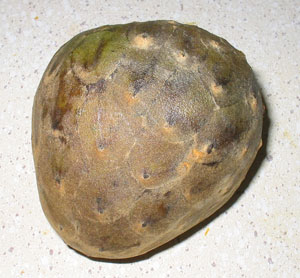 Sometimes I do not know their names. Thank you to everybody who told me that the strange, green fruit I picked up at the grocery store is a cherimoya. They are a very popular fruit that have several web sites dedicated to them and Mark Twain called them “deliciousness itself.” Still, I’d never seen or heard of them before. I’m evidently out of the fruit loop. I don’t recognize any of the musicians in the Top 10 anymore and I cannot identify a somewhat popular and beloved custard fruit. I am old and out of touch with the world.

The cherimoya is described as having a creamy, custard flavor and it lived up to its reputation. It was very yummy, sweet with a tart after taste. My only complaint is that there are a lot of hard brown seeds that I had to pick out. As shown in the picture below, after I ate all the white stuff they took up one fourth of the remaining shell. 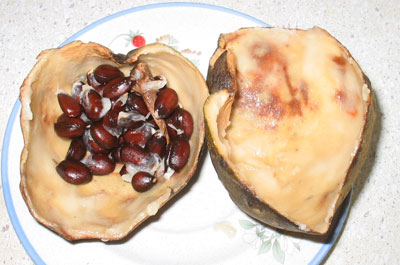 Sometimes if I’m feeling lazy, I will just eat the seeds in a watermelon or a grape, but biting into these seeds would have cost me some serious dental work. Someone should task the genetic engineers to breed a seedless version.

The dragon fruit looks like a doggy toy. Or a strange aquatic creature. And the Google image search for “dragon fruit” makes me wonder if what I ate was a real dragon fruit. I conducted a fruit autopsy and the insides look fairly different. 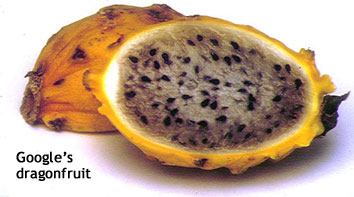 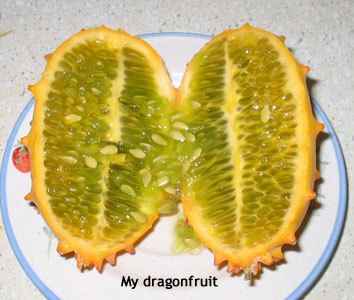 The dragon fruit is also supposed to be mildy sweet, but when I stuck a spoon into its guts and put it in my mouth it tasted like – slimy, cucumber, seeds! It was like someone had taken the most tasteless part of a cucumber with the most disgusting texture and injected it into a doggy toy. I actually threw this out without eating the whole thing, a first in Lick the Produce history. I don’t know if what I ate was a dragon fruit or not, but I’m never eating it again.

ETA: Thanks to Lesley and Tracy for revealing this is actually a kiwano! 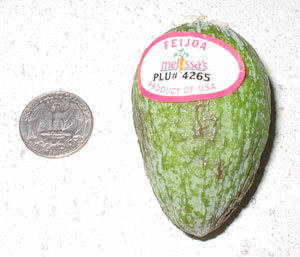 When I did a search for “fiejoa” I returned almost no results, making me wonder if I’d picked up some completely obscure fruit. Then I realized that I’d spelled it wrong because “feijoa” is evidently too good to obey the “I before E” rule. What a rebel. According to Wikipedia, it is also known as a Pineapple Guava or a Guavasteen.

The feijoa is a tiny, has soft flesh and a sweet smell. So it’s the fruit equivalent of a supermodel. It was very fragrant and tasted as good as it smelled, like a cross between a banana and a pear. I don’t eat supermodels, but I’d eat a feijoa again.

Later: Phoning it in

Earlier: A good reason to get a gym membership