Remember how my weight loss memoir to be published next year was going to be called Half of Me: The Last 200 Pounds are the Hardest? You do? Crap, I guess that memory eraser only works once. Forget that! My book is now going to be called:

(click to pre-order from Amazon at the discounted advance price of $10.85!)

and look, my publisher put me on the cover: 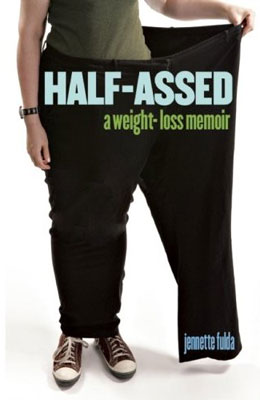 Imagine my surprise when I looked myself up on Amazon to find my huge fat pants staring back at me. When I sent my publisher my photos, it occurred to me that they could hypothetically use them on the cover, but I figured I was just being vain. Surely they would find someone with sexier forearms as the cover model. But no! That’s me! On the cover of my book! Someone hand me a paper bag to breath into please! I have no grounds to complain though. Hell, I scheduled the photo shoot myself. It’s unusual because authors don’t typically get much control over their covers. I’m glad I didn’t know the image would end up on the cover or surely I would have spent another 6 hours critiquing my shoe choice.

Why’d we change it? Because this is better. I know the use of the word “ass” will probably offend some of you. I’m sorry. If it embarrasses you to read a book with that title, just keep your fingers strategically placed over “ass” as you hold the cover. There are books that have much naughtier words in their titles that have sold well (Stitch ‘N Bitch: The Knitter’s Handbook

). If it’s still a big issue for you, I give you permission to design your own cover in PhotoShop and rubber cement it to the front if you want to. But if you want to find it at the book store, this is the name you will have to request. I originally came up with this title on the second page of my six pages of notebook scribbles, but Rah also came up with a variation on it in the name my baby thread and Christine morphed it into the same thing I’d scratched in black ink, which made me reexamine it. So congrats Rah and Christine! I will mention you in the acknowledgments of my book.

This name change reminds me of my grandfather, who had to get a copy of his birth certificate to join the navy in his early 20’s, only to discover there was no record of a John Gerard Fulda. There was however a birth certificate for Melvin Vernon Hitchins and an awkward family conversation that went something like, “Oh yeah, that guy you thought was your dad? Heh, funny story, he’s not your biological father. What, we never told you that?” So, there is some alternate universe where my name is Jennette Hitchins, which would be kind of cool because my motto could be “Jennette Hitchins is bitchin’ ” but might also suck because people could say “Stop your bitchin’, Hitchins!” But I am not Jennette Hitchins, I am Jennette Fulda. My grandfather changed the name on his birth certificate several decades after his birth. So just be grateful that we’re only changing the title of a book, not your name, and that it’s only happening a couple months later.

The title has changed, but the book remains the same. I hope you will still buy it, pretty, pretty, please

. It is tasty and delicious and inspirational. And as all fat girls should know, it’s what’s inside that counts. Thank you.