It’s time once more for me to try to eat fruits and vegetables that I’ve never eaten before, but only after I take poorly lit photos of them on my kitchen counter. However, eating new foods can be very tricky, as I learned when I bit right into a mango’s waxy skin, so thank goodness there were instructions printed right on the label this time. Thank you acorn squash growers of America for realizing I have no idea how to cook your product! You saved me two minutes looking it up on Google. 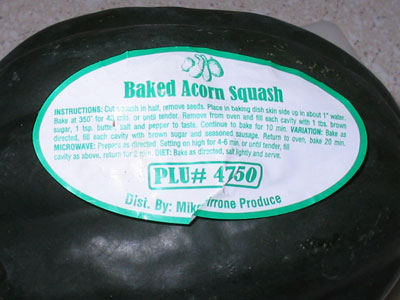 The acorn squash does sort of look like an acorn. When I picked it up at the grocery store, I had an urge to hold it up to my face with both hands and twitch my nose like a giant squirrel. However, I did not dig up the linoleum and bury it in the produce section. Instead, I just split it open with my giant knife and scooped out the insides before baking it in a pan of water. 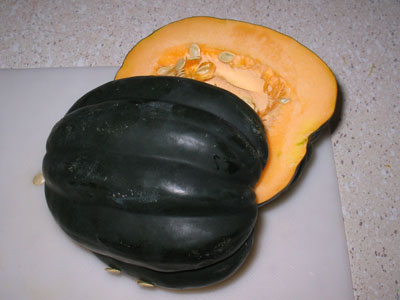 I scraped out the insides and served it with some margarine, salt and pepper and, wow, it was pretty damn good. I wasn’t expecting too much from a squash, but it was fairly tasty. The acorn squash is a bit high on the glycemic index though, so I won’t be eating this too frequently.

Last time I was moaning about how I couldn’t do a Kate Bush themed LTP entry because there were no guavas or sultanas or pomegranates around here. So what do I find at my local grocer’s the very next week? A bin full of pomegranates. 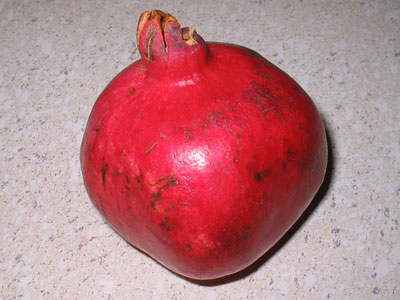 The pomegranate is as difficult to eat as it is to spell. I still have to look it up in Webster’s online every time and before eating it I read some directions. First you cut off the flowery top part. 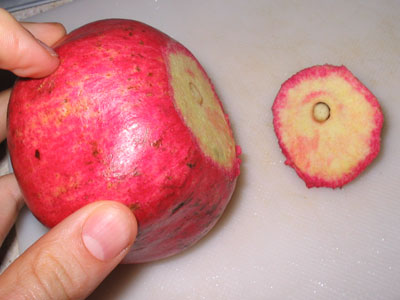 Then you score it into four sections. 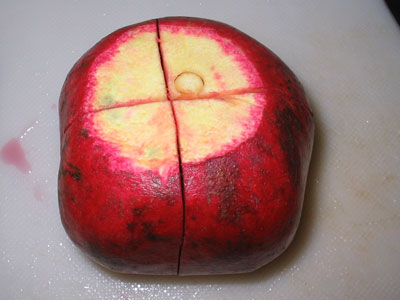 Next you place it in a bowl of water to soak, and then rip open the four sections, revealing all the seeds nestled in a white cocoon of… stuff. 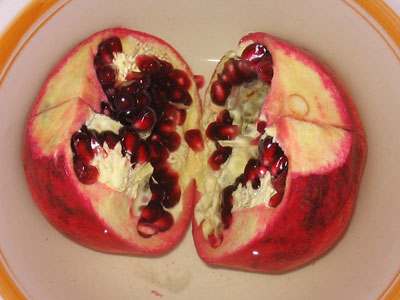 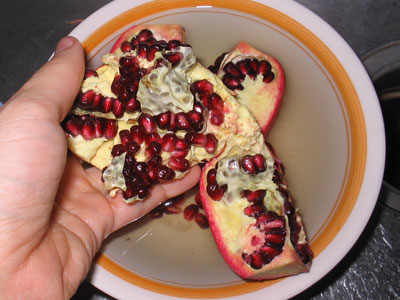 By the time I was done with this, I felt like I’d disarmed a dirty bomb. The seeds were fairly sweet and tasty, but I wouldn’t consider them worth all the work. Just hand me an apple instead. I prefer fruits I can just bite into and I know how to spell. I also hear pomegranate juice stains pretty badly, so don’t attempt this wearing your Sunday best.