Sometimes I think my coworkers are screwing with me. 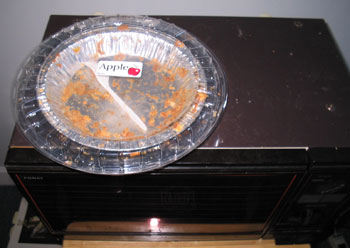 Either way, I never had a piece of the apple pie. I don’t need to be congratulated, as there is nothing inherently wrong with apple pie. Mmm, pie. But it is odd to think that just a couple years ago it would never have occurred to me that I could choose not to eat the pie. Instead I would have been thinking, “How can I eat three slices without appearing to be a total pig?” At one of my old jobs our boss bought a big sheet cake to celebrate a coworker’s promotion and the only thing that stopped me from going back for that third piece was the fear of fulfilling a fat girl stereotype. I just couldn’t be the morbidly obese girl who ate three corner pieces and scooped up the extra icing off the cardboard platter with her finger. It was bad enough that the blue icing turned my poo green. (I thought there was something seriously wrong with me until I remembered all the blue food dye I’d consumed.) I really wanted that third piece though.

Luckily, my desk is pointed away from the microwave and the pie that was sitting on top of it. I didn’t even have to look at it, so it was much easier to resist. Plus, I packed my lunch and had plenty of snacks to keep me full. I still think it’s rather foolish to leave yummy food unsecured around former fat girls. At least this time I don’t have to worry about the color of my poo.

Later: Enough about me, let’s talk about you

Earlier: I am not a model