Hey everybody, NBC is bringing American Gladiators back to television! You’ve got until October 1 to submit your application. I spent several summers of my childhood watching reruns of American Gladiators on the USA cable network between airings of My Two Dads, The Facts of Life and Just the Ten of Us. Each show featured two male and two female competitors who would face off against the “gladiators” in several trials of strength, agility and balance. Unlike the Roman gladiator games, there were no tigers or pointy spears, but there were huge Q-tips. 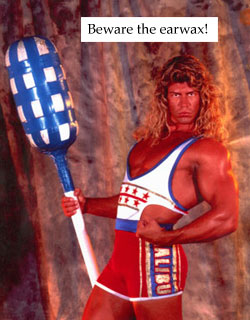 When they weren’t working out or abusing performance enhancing drugs, gladiators had part-time jobs performing inner-ear hygiene on giants. They also used the big Q-Tips in the “Joust” competition where competitors stood on two raised platforms and tried to knock each other onto the mats below. I doubt I would do very well in that game because I was the girl who was terrified to jump out of the back of the school bus during emergency evacuation drills. If I were to find myself at the top of a 6-foot platform being menaced by a bodybuilder on steroids called Zap, I’d drop the Q-tip and curl into a ball to cushion my inevitable fall.

A lot of the events on this show were rather ridiculous, which is why they were so fun to watch. All the gladiators had silly one word names like Laser, Turbo, or Bronco that made it sound like they were forming their own mutant superhero team. Each season was one long tournament and whichever competitor scored more points on each show got to move onto the next round. It will be interesting to see how they remake this series. I certainly have more appreciation for the athletic abilities it takes to do well climbing walls and dodging balls now that I’ve tried tennis and that I run on the trail as regularly as I am passed by other runners.

The application itself is interesting to read. For instance, you should not “harm anyone or any animals in the making of [your] video.” Thanks, I really needed that to be clarified. In question number 4 they ask “Do you work out?” but only leave four lines for people to brag about all the weight they can bench press. I’m betting people are going to be scrawling in the margins on that one. I also love how question number 19, “What conversation topics are ‘off limits’ for you at a dinner party?” is probably only be asked so they can needle you about said topics at your interview to see if you explode like a crazy person.

Question number 27 has you gauge your level of skill at different activities. Some of them are what you would expect: bungee jumping, gymnastics, rock climbing. But they also include things like: being bratty, manipulating people and tempting the opposite sex. Oh…kay. It’s as thought they just slip them in there between “high diving” and “motorcycle riding” to see if you’re paying attention. I took a long questionnaire for extra-credit in psychology once that was similar. You’d get a dozen questions asking if you liked reading books or if you like setting schedules and then suddenly they’d ask, “Can you read the thoughts of dogs?”

For question 42 you have to write a short poem or rap. For number 43 you have to draw a picture of yourself. Yes, draw, not attach a photo, but actually sketch your visage.

Also note that you cannot be a candidate for public office nor can you become one for a year after the show airs. So we won’t be seeing Hillary Clinton running The Eliminator.

I’m looking forward to the return of this show, though I know I could never be a contender as a contestant. I’ll have to settle for jousting my cat with normal-sized Q-tips for now.

Earlier: Weighing in on August